Fredrik Skarsvåg, CEO at Sparebanken Vest Boligkreditt, said the issuer had been preparing the inaugural green covered bond for some time since establishing its green bond framework in August 2019. This was the first from Norway to allow for both senior unsecured and covered bond issuance from a banking group – senior unsecured from Sparebanken Vest and covered from the Boligkreditt subsidiary. Three categories of eligible assets are included in the framework: green commercial buildings, renewable energy, and green residential buildings, with only mortgages for the latter eligible for green covered bonds.

“The covered bond company is the crown jewel of our funding sources, so we wanted to do things really properly,” Skarsvåg told Sustainabonds. “We spent a lot of time setting up a 360 degree sustainability strategy, because we see sustainability as another risk factor that impacts our value chain.”

Sparebanken Vest’s 360 degree approach aims to fulfil its goal of contributing to Western Norway becoming the leading region in Norway in climate technology and climate cuts by 2030, in focusing on itself, its owners, suppliers and customers.

“We wanted to have everything in place – particularly on the corporate lending side of the bank – in order to have the most impact going forward,” said Skarsvåg, “so we have set some really ambitious targets to reduce our climate footprint both within our own organization and how we want the corporate lending book to look in the future.

“We acknowledge that this will have a direct impact on our client base going forward, which customers are willing to do the transition and be there in the new low carbon emission environment, and who will not be there.”

He said the issuer had been monitoring the covered bond market and seen recent issuers paying increased new issue premiums, but decided to proceed – albeit cautiously – after receiving strong positive feedback from investors and ESG analysts.

“The market has been a bit wobbly recently, so we were still a little anxious,” said Skarsvåg, “after all, it’s ultimately up to the portfolio managers if they want to invest in the bond.”

On Wednesday morning, leads Credit Suisse, ING, LBBW, Natixis, SEB and Swedbank opened books with guidance of the mid-swaps plus 15bp area, and after an initial update reporting books over €1bn, including €50m JLM joint lead manager interest, the guidance was revised to 12bp+/-1bp, WPIR, on the back of over €1.1bn of demand, excluding JLM interest. The €500m (NOK5.35bn) deal was ultimately priced at 11bp, on the back of over €1bn orders, including JLM interest.

Syndicate bankers at the leads highlighted that the pricing was flat to fair value, whereas the last two euro benchmark covered bonds, from NN Bank and a fifth green Pfandbrief from Berlin Hyp, as well as an issue from Rabobank the previous week, had paid 1bp-2bp of new issue premium.

“The green element helped it get an extremely tight outcome,” said one. “I would attribute 1bp-2bp or so towards the green benefits they have received on this deal.”

Another lead banker attributed the pricing outcome to strong participation from green investors who tend to be less price sensitive than average, highlighting that the trade lost only €100m of orders from initial guidance to the tighter re-offer level.

“Given the nature of the funds they hold, they just need this,” he added, “so that was clearly helpful in gathering the pricing that we ended up with here.”

“Although it is difficult to say whether the result was solely attributable to the strength of Sparebanken Vest’s green bond framework, it was certainly an influencing factor,” he added. “I’m pretty sure that we wouldn’t have gotten away with this low spread if it weren’t for the green and sustainability strategy of the bank, and I think we ticked a lot of the right boxes of ESG scores in different portfolio managers around the world.”

“The dealers told us they had never seen such a high portion of dedicated dark green investors in any covered bond transaction,” said Skarsvåg (pictured). “We also had some Asian investors who bought their very first covered bond, which is a fantastic thing for us. 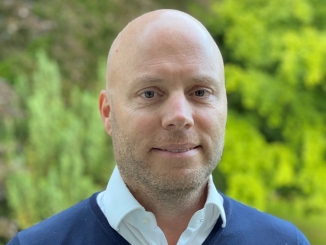 “I had several personal emails from analysts and portfolio managers from some of the biggest fund managers in the world sending their congratulations – they actually thought this was one of the strongest green deals they’ve ever seen. That is quite new for us, and very inspiring for putting even more focus on the topic going forward.”

Investors were particularly impressed with Sparebanken Vest’s approach to sustainability, which Skarsvåg said is incorporated into every part of the bank, while further welcoming the fact it is a savings bank 60% owned by local society.

“They really noticed that we have sustainability baked into our DNA,” he said, “and as a savings bank, we give out social dividends to society as gifts and support different social projects, and we have earmarked quite a big chunk in the past two years to invest into sustainability projects, like cleaning up the oceans from plastic, recirculating of oil platforms and more.

“A few years ago, just outside Bergen, where our headquarters are, a whale that had choked on plastic washed up on the shore, and I think this in particular really opened the region’s eyes to such issues.”

Sparebanken Vest launched the issue alongside a new “sustainability product framework”, which aims to steer its lending activities towards impactful sustainable activities, with reference to green use of proceeds and sustainability-linked loans.

“The sustainability product framework is a tool to nudge our customers towards a more sustainable path,” said Skarsvåg, “so there’s a bigger chance they’ll survive the low carbon environment. The key is to incentivize the borrowers’ commitment to sustainability, and if they invest in something that brings down carbon emissions, then we can offer better terms and conditions if they meet predetermined performance benchmarks.”

“That’s the no-nonsense idea of sustainability,” said Skarsvåg. “It’s just another type of risk that comes in and you have to take that into consideration, otherwise you may encounter big problems in your lending book going forward.”

While there has been a relatively high volume of sustainable and green bond issuance from Norway and the frameworks have employed very similar standards with regards to residential mortgages, Skarsvåg noted that Sparebanken Vest ranks as one of the highest-rated issuers from the jurisdiction.

“I think what stands out a bit with us is how we have included the ESG in all parts of the bank,” he said. “We are top notch on all the three big ESG rating agencies – AA from MSCI, prime from ISS ESG, and we are in the eighth percentile at Sustainalytics. We have taken inspiration from ING and how they have tackled this topic in their bank, and they have also been the main structurer for both frameworks.

“It’s pretty clear our investors are really focused on ESG now,” he added, “so it’s not so clear to me which element has the biggest impact: that we have an ESG focus, or the green bond.”

Sparebanken Vest will continue to focus on euro issuance for green bonds for the foreseeable future, given the investor focus on green bonds in the euro market, with Norwegian investors arguably more focused on broader ESG considerations, according to Skarsvåg.