The Climate Bonds Initiative (CBI) sees Europe as being at the forefront of the global green bond market, it said in a report focusing on European activity published on Wednesday. As of the end of the first quarter of 2018, EUR122bn of green bonds had been issued in Europe since the launch of the very first green bond, by the European Investment Bank (EIB) in 2007.

This represents 37% of the global total and puts Europe well ahead of all other continents. The market is also growing rapidly, as EUR52bn of the EUR122bn outstanding was issued in 2017, with 48 issuers selling their first green bond last year.

“Europe has fostered an engaged and active green bond market,” the report says. “European issuers span the continent and the spectrum of issuer types.

“They have issued in a variety of debt formats, currencies and tenors, and sector diversity has grown over time.”

All tables and charts sourced from CBI report

European financial institutions, including both development banks and commercial banks, have issued EUR48bn of green bonds since the first deals emerged in 2010.

“One point we want to bring out is that financial institutions are much more than just issuers,” said Filkova (pictured). “The green financial infrastructure they’re putting in place is quite important in supporting the market more broadly.” 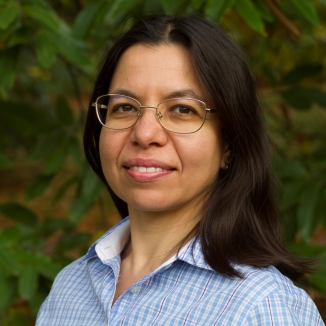 Excluding development banks, the largest and most prolific European financial corporate issuer is Crédit Agricole, which has issued 100 bonds and has EUR4.6bn outstanding, including a US$3bn synthetic ABS.

However, Filkova noted there is substantial scope for growth in this market segment.

“Compared to the number of financial institutions in Europe, 35 is a relatively small number,” she said. “There is definitely scope for more issuance, both from existing issuers and institutions that haven’t issued green bonds yet.”

A substantial volume of European FIG issuance to date has come from development banks, Filkova added, noting that the CBI expects issuance from financial corporates to increase. 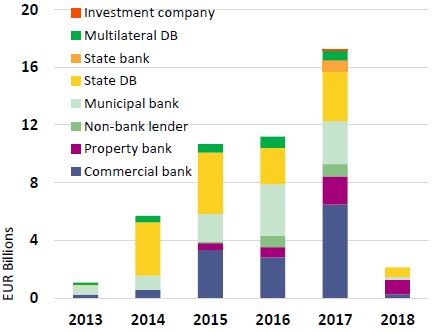 Broadening of instruments, narrowing of use of proceeds

“At present we track EUR15.3bn of perpetuals and hybrids, private placements (including loans and project finance), ABS, RMBS, covered bonds, Schuldschein and an aggregation MTN programme secured on commercial mortgage receivables,” says the report. “Structural diversity bodes well for the investment market’s ability to support a range of issuer needs and business/funding requirements.”

In the wider European green bond market, the energy sector accounts for the largest share of use of proceeds, although the amounts given to buildings and transport has risen in recent years.

However, among European financial institutions, the report notes that the use of proceeds has become less diverse as the market has grown, and that the mix has shifted to feature an increasing share of property financing, noting examples such as ABN AMRO and Barclays, which have financed energy efficient housing loans via senior unsecured bonds, and Berlin Hyp and LBBW, which have financed commercial property loans.

Filkova notes this uptick in the issuance of debt relating to buildings has in part come from property companies, but that “a very substantial amount” has come from banks.

“We expect to see more of that,” she said.

She added that the expansion of coverage of benchmarks for buildings’ energy performance – the lack of which is often cited by financial institution issuers as one of the greatest challenges in establishing a green bond programme – is key to the market’s growth.

“The ability to highlight best performance in more markets will we think also provide impetus,” she said.

Similarly, the introduction of an EU sustainable finance taxonomy – expected as soon as next spring – could further support growth.

“A lot of financial institutions are looking into green tagging, with some more advanced than others,” said Filkova. “Having a green taxonomy across the EU, based on HLEG work, would certainly help.

“Once you have tagging in place, that will really facilitate financial institutions bringing green bonds to the market, because it is easier for them to know what they’ve got on their books and to originate the right sort of loans to support more issuance.”

Green bonds are issued in order to raise finance for climate change solutions. They can be issued by governments, banks, municipalities or corporations. The green bond label can be applied to any debt format, including private placement, securitisation, covered bond, sukuk. Labelled green loans are an option if they comply with the ICMA Green Bond Principles or the LMA Green Loan Principles. The key is for the proceeds to go to “green” assets.

Only bonds with at least 95% proceeds dedicated to green assets and projects that are aligned with the Climate Bonds Taxonomy are included in our green bond database and figures. For example, sustainability bonds with a wider use of proceeds or bonds which fund large amounts of working capital would be excluded.

NAB first to include green tranche in mixed RMBS

National Australia Bank (NAB) took an innovative approach to green securitisation when it sold a A$300m green tranche as part of a A$2bn residential mortgage backed security (RMBS) on 8 February, with low carbon buildings part of a wider pool of mortgages.

Green bonds backed by mortgages might seem a natural source of supply from banks. However, a lack of joined-up data is forcing banks to be creative in carving out pools of energy efficient loans. Neil Day explores the building blocks for a bigger market with ABN AMRO’s Joop Hessels.

As a conduit for Covid-19 economic mitigation measures, KfW is at the heart of Germany’s fight against the impact of the coronavirus. New treasurer Tim Armbruster and head of IR Jürgen Köstner spoke to Sustainabonds’ Neil Day about the practical and market challenges it faces in its latest role, and its overall sustainability ambitions.

Bringing you coverage of deals and initiatives that are shaping green and social bond markets, Whether issuer or investor, regulator, banker or other stakeholder (aren’t we all?), we hope you will find our free to access publication valuable.