Ahead of 150th birthday celebrations on 8 May marked by a gift of saplings to its home city, Berlin Hyp tightened its pioneering green bond framework and revealed an increasing positive environmental impact from the programme.

Take a stroll down Schöneberger Hauptstraße in Berlin and you may notice the presence of saplings taking root along the street. Take a closer look and you’ll see that many of the self-proclaimed new Berlin “city trees” are there thanks to Berlin Hyp, one of the supporters of a long-standing project to green the capital.

“Berlin has always been a very green city,” says Bodo Winkler, head of funding and investor relations at Berlin Hyp. “It is important for Berlin to have companies and private individuals helping the public sector green the city in order to make sure it will be a green city in the future, too.”

The German lender chose to donate 150 trees to reflect its 150th birthday on 8 May.

While celebrating this grand old age, the bank has dubbed it “a good start” – they say you’re never too old to learn and Gero Bergmann, member of the board of management responsible for markets at Berlin Hyp (pictured above at its birthday celebrations), says that this is indeed an obligation for the bank.

“Resting on our laurels is not an option for us.”

The bank made good on this sentiment on 27 April, the third anniversary of its inaugural green Pfandbrief: before its birthday celebrations the bank had for many months been working on updating its green bond framework to introduce stricter standards, and released this at the same time as publishing the latest annual report for its green bonds.

Being the first issuer of a green benchmark covered bond, Berlin Hyp had no blueprint from which to construct its pioneering programme in 2015. The green bond framework has nevertheless served the issuer well through repeat successful issuances.

Helmut Kolb, real estate valuer and energy efficiency specialist at Berlin Hyp, notes the original green bond framework – which had focussed solely on energy demand for heating – had met investors’ expectations, and was verified by a second party opinion.

“However, internal and external discussions indicated that a review of our old framework was necessary in order to take into consideration changes that occurred since we had published our first framework,” he says. “The question was how robust are the eligibility criteria on a long term perspective.”

The main challenge in this context, says Kolb, has been and continues to be the lack of an official database for energy performance indicators in Germany. Berlin Hyp therefore undertook a joint project with energy consulting firm Drees & Sommer to establish just such a reliable, representative and up-to-date database.

As part of this project, Drees & Sommer subjected the assets in Berlin Hyp’s green finance portfolio to a benchmarking test, which confirmed the portfolio’s outstanding energy quality and the strictness of the criteria. Still, to safeguard the quality of the portfolio in the medium to long term, Berlin Hyp and Drees & Sommer developed measures that resulted in three major changes implemented in the new framework published on 27 April. 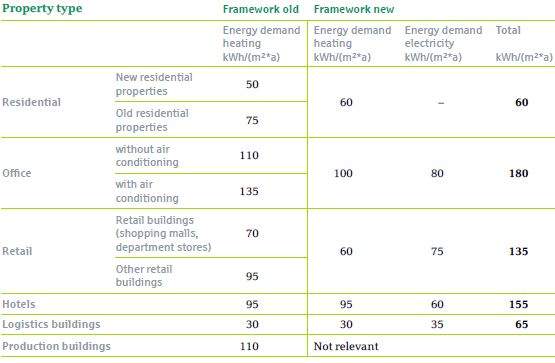 “The final energy demand figure is more convincing than the value of primary energy demand because it refers to the specific energetic quality and performance of buildings,” says Kolb (pictured). 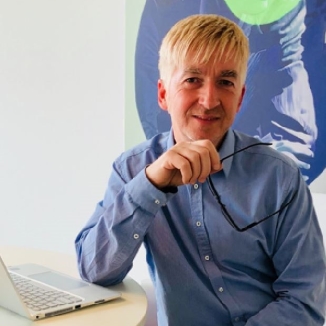 “Why is that? Electricity contributes almost half of the entire energy consumption of a building, so in order to get the total picture of the environmental and greenhouse gas impact of a property, it has to be included.”

The eligibility criteria are generally to be fulfilled on an additive basis, meaning that the main decision criterion is the sum of the energy demand for heating and electricity, although the maximum values in each energy demand category may not be exceeded by more than 20%.

“In other words, a slight excess in either the heating or electricity figure is possible, provided that the overrun is compensated by a lower demand in the other category,” says Kolb.

Thirdly, the threshold of the heating component for offices and retail premises – which make up 94% of Berlin Hyp’s portfolio – have been lowered by 35% and 14%, respectively.

The revised framework applies to all new loans for green buildings and does not affect assets that are already in the green finance portfolio. Nevertheless, Winkler notes that all of the green loans originated last year would have fulfilled the new criteria relating to heating demand implemented.

oekom research re-verified Berlin Hyp’s framework in light of the amendments, again assessing positively the sustainability of the framework.

Berlin Hyp’s third annual reporting shows that the bank’s green finance portfolio grew by EUR934m in the reporting period from 1 March 2017 to 28 February 2018, thanks to a EUR561m increase in new green business, comprising 16 loans, and EUR373m in existing loans identified as green financing.

Since the issuance of Berlin Hyp’s first Green Pfandbrief, the portfolio has grown by more than 450%.

“We are delighted about this positive development,” says Bergmann. “This is all the more true as the growth brings us closer to our ambitious strategic goal of achieving a 20% share of green loans in our overall loan portfolio by the end of 2020.”

Winkler notes that the bank’s green finance portfolio currently amounts to 14.24% of its total lending, or EUR2.958bn. The 20% target would translate to just over EUR4bn of green lending based on the current size of Berlin Hyp’s total portfolio, he says, but potential increases in lending have to be taken into account.

“We are on a good track,” says Winkler (pictured). “The target remains ambitious, but doable.”

In order to support this growth, Berlin Hyp continues to incentivise loans for green buildings with a discount of 10 basis points.

This year’s annual impact reporting shows that, depending on the underlying benchmark, every EUR1m invested in Berlin Hyp’s green bonds helps to avoid between 8.7 and 36.3 tonnes of carbon emissions per year, up from between 4.7 and 28.7 tonnes of CO2 in the previous year.

Berlin Hyp was assisted in its calculations by Crédit Agricole CIB’s Sustainable Banking Team, and the results were reviewed by oekom in its re-verification of the framework.

“What is quite striking from our point of view is that no matter which baseline you apply, we were able to increase the impact, i.e. the avoidance of greenhouse gasses and of carbon,” says Winkler.

“The explanation for that is quite simple – the buildings that we finance get better and better every year. Our hope is to follow this path in the future.”

Deutsche Kreditbank (DKB) on Thursday issued the first benchmark social mortgage Pfandbrief, a €500m 10 year that attracted €2.36bn of orders and which tackles the politically sensitive topic of housing in its hometown of Berlin.