Landesbank Baden-Württemberg (LBBW) issued the first green senior non-preferred sterling benchmark on 22 January, a £500m five year deal in which a maturing ESG UK investor base considered both LBBW’s green bond and issuer credentials, according to those involved in the deal.

The planned trade was announced the Friday before launch (17 January), with Barclays, LBBW, RBC and Santander mandated for the five year sterling-denominated benchmark senior non-preferred transaction, with investor meetings scheduled for the following Tuesday (21 January).

A combination of factors played into LBBW’s decision to approach the sterling market with the green trade, according to Andreas Wein, the German bank’s head of funding and debt investor relations.

“We had outright sterling needs from our balance sheet that we wanted to refinance,” he told Sustainabonds, “and if you compare the sterling levels for senior non-preferred to euros, it made sense from an economic point of view – which is often not the case. That then offered us a great opportunity to diversify our investor base.

“And when we were preparing the transaction and considering our options, we figured that issuing in green format would simply add to the interest in the transaction. That turned out to be true, because on our one-day deal-related roadshow in London we managed to see 25 investors, which is quite a lot, and part of that interest was driven by the fact that it was a green transaction.”

Throughout the process, not only the green bond’s credentials, but also LBBW’s issuer ratings were flagged – 83/100 from Sustainalytics, Prime, C+ from ISS-ESG, AA from MSCI, and BB positive from IMUG.

“Within the sterling asset management community, there was a twofold assessment of the offering,” said Anthony Tobin, European head of DCM syndicate and frequent borrower origination, “with investor falling into two camps, of either being very pleased to purchase such a green security itself, or being influenced by the fact we highlighted LBBW’s high ESG ratings on the trade. So the deal benefited from demand across both camps.”

On the morning of Wednesday, 22 January, the leads opened books with initial price thoughts of the Gilts plus 115bp area of the five year sterling senior non-preferred benchmark, rated A2/A- (Moody’s/Fitch). After an hour and three quarters, books above £500m were reported, and after three and a quarter hours the spread was fixed at 108bp on the back of more than £950m of demand. The size was ultimately set at £500m (€587m) on the back of a final order book of some £985m. 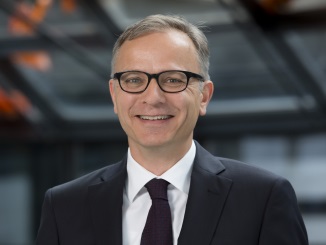 “The 7bp move shows that there was very good interest in the transaction,” he said, “and we managed to obtain an order book of over £950m with 66 investors. As I mentioned, diversification into the UK investor base was an important topic for us and we fully managed to achieve that here, with 74% placed in the UK and Ireland, including some new accounts.

“And coming back to the green angle and the discussions we had about the bank’s ESG ratings: over 70% of the investors who took part are signatories of the UN Principles for Responsible Investment and we believe that reflects in part the green bid.”

Alongside the UK and Ireland’s 74%, the Nordics were allocated 9%, Germany and Austria 6%, Switzerland 4%, Asia 4%, and the rest of Europe 3%. Asset managers took 78%, central banks and official institutions 13%, insurance companies and pension funds 7%, and banks and private banks 2%.

RBC’s Tobin said the strong outcome reflected the development of the sterling investor base in relation to green bonds.

“Sterling hasn’t been the swiftest market to develop in terms of green supply, with no discernible difference in green execution relative to standard execution,” he said, “but this transaction is a good validation that for highly scoring ESG issuers and the green format, the sterling market can be a viable alternative.

“This comes as over the course of the past year or so we have seen ESG overlays being applied to overall investment strategies, so that when we speak to asset managers we are no longer talking about green-specific portfolios – the vast majority of the funds they manage now have some form of ESG overlay applied to them.”

A market initiative to produce a standardised pan-European protocol and portal for financial data on energy efficient mortgages, EeDaPP, has won support and funding from the European Commission, ahead of the forthcoming pilot phase of the Energy efficient Mortgages Action Plan (EeMAP).

Support is being sought from the European Commission for a “market activation framework” to take the Energy Efficient Mortgages Initiative into its next stage, an EMF-ECBC official told an ECBC plenary, which also heard positive noises, with caveats, on sustainable finance from the German Ministry of Finance and BaFin.