Landesbank Baden-Württemberg aims to build green benchmark curves, after having expanded and more than doubled its green bond portfolio, and wrapped up EUR750m senior and $750m covered bonds in the space of a week, the latter – the first dollar green covered bond – attracting unusually strong demand inside fair value.

The German issuer inaugurated its framework in December 2017 with a EUR750m five year senior unsecured deal and followed this up with its first green covered bond in June 2018, a EUR500m five year mortgage Pfandbrief.

Since then it has added UK commercial real estate to the energy efficient buildings part of its framework that already included German and US properties, and initiated renewable energy projects (wind and solar) as an eligible category for use of proceeds. Energy efficient buildings constitute EUR4.6bn of LBBW’s green bond portfolio and renewables EUR1.3bn, with the portfolio growing from EUR2.7bn at the end of 2017 to EUR5.9bn at the end of 2018, making it the second largest such portfolio in Germany.

“It’s a major step forward,” said Peter Kammerer, head of investor relations at LBBW. “The eligibility criteria are also now stricter than before and the reporting more accurate.”

The addition of the renewables means that the greenhouse gas avoidance of the overall portfolio is equivalent to one million tons of CO2 per year. The latest two transactions take LBBW’s issuance to some EUR2.72bn equivalent.

“So there is still a lot of room to do more green transactions,” Patrick Steeg, head of asset and liability management at LBBW, told Sustainabonds, “and what we would like to achieve, if possible, is to make our public appearances, i.e. benchmark transactions, in a green format.

“Sustainability has played a very important role within LBBW group for many years, and green bond issuance is one of the expressions of our sustainability strategy.”

The bank has also been working on a social bond programme to operate alongside its green issuance.

LBBW attracted $2.3bn of orders to the $750m (EUR672m) no-grow three year Reg S mortgage Pfandbrief last Tuesday (21 May), enabling the leads to revise guidance from the mid-swaps plus 30bp area to the 24bp area, and ultimately price the triple-A rated new issue at 24bp. This was some 2bp-3bp inside fair value, according to bankers.

European issuers have typically paid up to access the dollar covered bond market, at times some 10bp, to achieve benefits such as investor diversification and the match-funding of US dollar assets. However, LBBW’s pricing was deemed only 3bp-4bp more than where it might issue in euros, and Steeg said that he doubted a comparable euro benchmark would have achieved such an impact given the negative yield and spread environment in Europe. And he attributed the pricing through fair value to the green nature of the transaction. 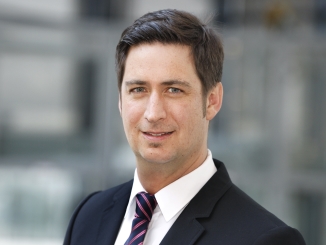 “We are extremely happy with the successful outcome,” said Steeg (pictured). “We didn’t expect the level of demand and the pricing power we achieved.”

The lead syndicate banker described the level of demand as “huge”. According to the leads, the $2.3bn book is a record for a US dollar Reg S covered bond – such issuance from European banks typically encounters lower demand than larger US dollar 144A covered bond issuance, most of it from Australian and Canadian banks.

The deal benefited from three particularly larger orders for green portfolios that would not have been present in a conventional bond, according to Steeg.

“Since our last, green euro transaction a year ago the investor base for green has grown,” added Kammerer, “and on this green dollar covered bond there was substantially higher demand. And compared with past Reg S dollar transactions, this new one saw some of the same investors, but now they are emphasising that they are looking for paper for their ESG portfolios.

“So we saw higher orders from existing investors and very green investors that are new to our US dollar covered bonds.”

The new issue came ahead of the redemption of a $650m three year LBBW mortgage Pfandbrief on Friday (24 May).

“We have US commercial assets in our cover pool and part of these are in our green portfolio,” said Kammerer, “so it was a natural fit from both sides.”

Bank of China launched what it dubbed a green covered bond in November 2016, but most market participants did not consider it to be one.

Leads DZ Bank, ING, JP Morgan, LBBW, Natixis and Société Générale went out with initial guidance of the 65bp over mid-swaps area for the EUR750m no-grow five year deal, rated A2/A-, on 15 May and ultimately priced it at 53bp over on the back of more than EUR1.1bn of demand from some 150 accounts good at the re-offer level. The pricing was deemed some 5bp through fair value.

Steeg said the flurry of issuance – LBBW also sold a EUR500m 10 year Tier 2 on 29 April – followed the updates to its debt issuance programme and then green bond framework, with the strategic Tier 2 transaction having been prioritised.

SpareBank 1 Bolgikreditt launched the largest single-tranche green bank bond outside China and the first green benchmark covered bond with residential mortgages on Tuesday, a EUR1bn deal made possible by taking building codes and years as a proxy for energy efficiency – a strategy that could be used by others.

QBE issued the first capital instrument from a financial institution to take the form of a social bond on 9 November, a US$400m Additional Tier 1 gender equality bond that attracted some US$9.5bn of orders.

The use of renewable energy assets as covered bond collateral under a proposed Luxembourg framework would bring extra risks versus traditional collateral, according to Moody’s, but the rating agency highlights various mitigants and says the law is overall credit positive for funding such assets.