LBBW sold the largest green bond from a European bank on Tuesday, a Eu750m four year senior unsecured debut at the tightest spread of any German senior benchmark, inaugurating a framework from which it can also issue covered bonds and that incorporates a new asset eligibility methodology.

The new issue makes Landesbank Baden-Württemberg (LBBW) the third German bank to enter the green bond market with a programme set up for both green senior and Pfandbrief issuance, following similar moves from firstly Berlin Hyp and recently Deutsche Hypothekenbank – which both chose to issue a green Pfandbrief before debuting in green senior.

“This green bond issuance needs to be seen in the context of our broader sustainability strategy,” said Andreas Wein, head of funding and investor relations at LBBW. “Sustainability is a central part of LBBW’s strategy, so it is a natural consequence for us to enter the green bond market.

“We want to give investors access to green assets for their sustainable investment portfolios.”

Wein (pictured below) said the opportunity to diversify the bank’s investor base was also a factor in the decision to establish a presence in the green bond market.

“Once you do issue a green bond, it offers access to a new investor base and, especially, it gives you a good opportunity to enter a dialogue with investors that you haven’t been a part of before,” he said. 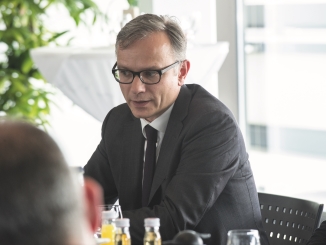 Having set up its programme, LBBW opted to make its debut with a senior unsecured issuance rather than a covered bond as it believed this product would attract greater investor interest in current market conditions, said Wein.

Books were opened at 10:34 CET with initial price thoughts of the mid-swaps plus mid/high 20s area, and after around 50 minutes the leads announced that books had exceeded Eu1bn, excluding joint lead manager interest. Guidance was subsequently revised to the 20bp area on the back of books in excess of Eu1.3bn, before the spread was fixed at 17bp, with books over Eu1.4bn. Books closed at 13:30, at the size was set at Eu750m.

The deal is the largest green bond issued by a European financial institution in any currency (although not the largest under the broader sustainability banner), while the only bigger green bond issuance in euros has been from China. The final spread is the tightest ever for a benchmark senior unsecured bond from a German issuer, according to a banker at one of the leads.

“It went extremely well and we are extremely pleased,” said Wein. “Going from IPTs of the mid/high 20s to reach a price of 17bp, and a size of Eu750m – making this the largest inaugural green bond by a German bank – is obviously a huge success for us.

“In terms of pricing, volume and investor attention, we got exactly what we were aiming for and it ticked all the boxes for us.”

The final order book stood at over Eu1.3bn including 94 accounts.

“This is a very, very strong statement for LBBW,” said a syndicate banker at one of the leads. “At the end of the day, this is bail-inable debt, priced at plus 17bp – which just weeks ago is where you’d have priced a four year senior preferred.

Under Germany’s bail-in framework, outstanding and currently-issued senior unsecured debt will be treated as bail-inable under BRRD (in line with legislative senior non-preferred or HoldCo debt in other jurisdictions), with a legislative senior preferred category forthcoming.

“LBBW is still a relatively rare issuer in the senior market and always enjoy a strong domestic bid,” added the lead syndicate banker, “so when you add all of that to the green element, you have an extremely strong deal able to price inside the 20bp level – which was the number to beat, in my view.”

The deal was deemed to have offered a new issue premium of 2bp at most, with bankers citing LBBW June 2022s at 17bp, bid, and adjusting for that deal’s larger size – of Eu1.2bn and earlier maturity.

Bankers added that the result was particularly impressive given the time of year, with many markets slowing down and investors becoming more selective as the year-end approaches.

“Yesterday could prove to be the very last execution window in FIG, and in that context to get so much demand at a record spread is a really impressive outcome,” said a syndicate banker away from the leads.

Wein said it was too early to comment on when LBBW may issue its first green Pfandbrief, but said the issuer plans to use the programme for regular issuance.

“We will continue to use this platform for future issuance, both in the senior and covered bond format,” he said. “We want to be a continued presence in the green space.”

LBBW noted that its green bond framework was structured in a relatively short timeframe of around four months.

“It took a lot of work with a lot of dedicated people to achieve that result in a relatively short time frame,” said Frank Damerow, director, sustainable finance and strategy at LBBW (pictured below). 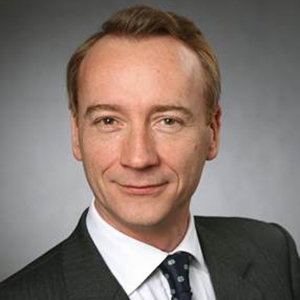 The proceeds of the deal will be used to finance or refinance an eligible green loan portfolio comprising green commercial buildings, which meet a set of defined standards, or renewable energy projects.

This method is used to ensure that the carbon performance of the selected buildings is among the top 15% in Germany, relating primarily to the energy efficiency of buildings and not to green building certificates – as in the case with the issuance of other green bonds, LBBW notes. The carbon performance of existing buildings is thus defined depending on the national legislation on building energy efficiency at the building year without information on energy consumption.

“It was important to find a way to easily categorize what the estimated performance is, and through this you can calculate the relative energy efficiency into avoided carbon emissions,” said Damerow. “This method is very helpful as it allows a broad range of market participants to easily assess the efficiency of our real estate portfolio.

“The good thing is because it’s an existing building stock analysis, based on official data from Dena (the German Energy Agency) which was available in 2017 in Germany for the first time, and matched against underlying regulation in the CRE market, that allows you to capture a broad, regulated market.”

Damerow added that LBBW will work to improve and generate better data over time.

“We also wanted to make a contribution to the broader market development,” he said. “The insight from this methodology really allows other market players to make energy categorizations and estimate the carbon intensity of their existing CRE portfolios.”

LBBW’s green bond framework has received a second party opinion from oekom research, including confirming the framework’s alignment with the Green Bond Principles. LBBW has a C+, Prime, corporate rating from oekom, with only Deutsche Kreditbank having a higher rating (B-) in its financials/public and regional banks peer group, with B- also being the highest corporate rating assigned to any bank by oekom.

The senior unsecured deal is rated A1 by Moody’s and A- by Fitch.

Sumitomo Mitsui Financial Group (SMFG) sold the first green HoldCo transaction in euros on Wednesday, a EUR500m seven year fixed rate trade that attracted over EUR1.6bn of demand, pre-reconciliation, to achieve tight pricing, while Japanese peer Mizuho is due with a senior trade after a roadshow ending today (Friday).

Berlin Hyp sold over half a EUR500m eight year green Pfandbrief to investors classified as green at the tightest spread of any euro benchmark covered bond this year on Wednesday, in what head of funding and IR Bodo Winkler hailed as an amazing result, even if yield moves made pricing “a little bizarre”.

Sparebanken Vest has established the first Norwegian green bond framework that allows for both senior unsecured issuance by the bank and covered bond issuance by its dedicated subsidiary, Sparebanken Vest Boligkreditt, with green buildings and hydropower the eligible categories for loans.