DNB on Wednesday became the first commercial bank from the Nordic region to sell a green bond, issuing a Nkr1bn (Eu115m) five year deal whose proceeds are earmarked for financing renewable energy projects.

DNB said that its green bond was independently assessed by DNV GL, which assesses, classifies and advises on ship and energy matters, and was found to conform to Green Bond Principles, a set of recommendations for green bonds established by a group of financial institutions that the International Capital Market Association (ICMA) supports.

The bank said that as a significant market participant in the financing of energy and the renewable sector in Norway and internationally it is well positioned for strong growth anticipated in these areas, especially solar, wind and hydroelectric power. 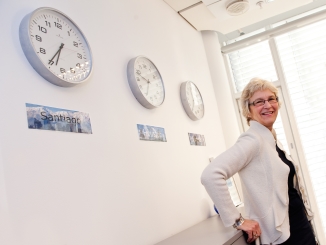 “Green bonds are a very exciting instrument, and the capital raised enables us to finance major parts of 14 hand-picked wind power projects in which DNB is involved in Ireland, England and Sweden,” said Berit Henriksen, head of DNB’s energy division (pictured). “We believe that the green bond market has a bright future, and DNB would like to be part of this.

“We note that institutional investors and private savers are increasingly interested in sustainable investments, and some investors also have their own specific ‘green’ or sustainable asset management mandates,” he added. “This means that green bonds could give us access to new and different sources of capital than our ordinary bond issues.”

According to a funding official at DNB, the five year issue was priced at 52bp over three month Nibor, which he said was on a par with what the bank would achieve with a standard bond issue in the Norwegian market.

The new issue will be listed on the Oslo Stock Exchange in a new green bond list that has recently been established.

“This is the first in Scandinavia, but it’s still a small trade, and many people would expect a large financial institution to bring a real green benchmark to the market this year.”

NordLB Luxembourg Covered Bond Bank is preparing to issue what it expects to be the first covered bond backed by renewable energy assets and launched under a dedicated law, with its debut likely in early 2019, according to officials at the issuer.