A pdf of this article and accompanying SLB feature can also be downloaded here.

As the Dutch gas transmission network operator, and in light of its broader interests, state-owned Nederlandse Gasunie has a key role to play in the Dutch energy transition. The company has been tasked by the government with developing the national infrastructure for the transport of hydrogen, and in line with its “Vision 2030” outlined in 2020, it plans to transform itself from principally a gas transmission company into an energy infrastructure company.

This includes investments of €7bn in energy transition infrastructure in the period to 2030, which, alongside hydrogen, will take in carbon capture utilisation and storage (CCUS), heat and green gas. It has also created nine “Gasunie Green Deals” to translate the UN Sustainable Development Goals (SDGs) into concrete activities.

According to ISS ESG, which rates the company Prime, Gasunie ranks 14 out of 52 companies in its gas and electricity network operators sector.

With such investments and credentials in mind, Gasunie might seem an ideal candidate for a use-of-proceeds green or transition bond.

However, when Gasunie began discussing in 2019 how it might extend its sustainable debt finance activity and enter the bond market in a manner complementary to its vision — which in 2020 was reflected in a sustainability-linked revolving credit facility — it found that, as with many things in life, timing is everything.

A large part of the €7bn investment plan on obviously “green” spending such as hydrogen infrastructure is earmarked for the latter half of the decade and/or on projects yet to be finalised, and nearer term projects do not require a level of debt finance commensurate with a bond issue. 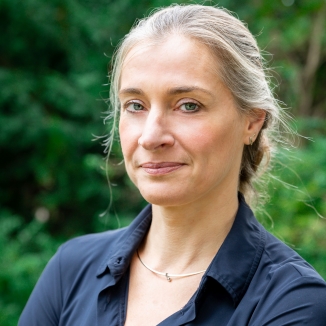 “We believe it’s good to include sustainable elements in our bonds,” says Gea Paas Broekman, front office manager in Gasunie’s treasury (pictured). “So we looked internally at our projects in the coming years, as we initially thought a green bond would be appropriate. But it’s currently too early for such an instrument, because we don’t have final investment decisions for our key energy transition projects that are aligned with the EU Taxonomy.

“However, we have already stipulated certain initiatives and targets to comply with the SDGs, and so we thought it would make sense to issue a sustainability-linked bond.”

The company therefore set to work on an SLB framework with sustainability structuring advisors ABN AMRO and NatWest Markets.

“While a green bond may be a longer term ambition, Gasunie already has the opportunity for sustainable issuance with the SLB format,” says Dick Ligthart, director, sustainable markets, at ABN AMRO. “It can thereby communicate its ambitious and industry-leading decarbonisation targets to investors.”

“For Gasunie, there is still uncertainty about the regulation and how they will fit,” he says, “so they cannot really make a commitment now for the use of proceeds. From that perspective, it is good that they have the SLB market available.” 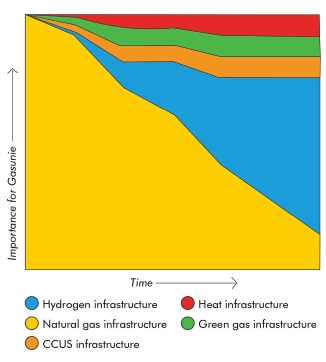 Central to the SLB framework are its KPIs and sustainability performance targets (SPTs), and Gasunie has included two of each that can be selected for its issuance, with a focus on those that it can control and for which it has data.

The first relate to cutting methane emissions, which accounted for 44% of the company’s Scope 1 emissions in 2020. Gasunie is seeking to reduce these from 138 kilotonnes of CO2-equivalent in 2020 to the SPT of 70 in 2030 through measures such as avoiding leakage.

“We want to make clear to the outside world that our transition pathway involves not only long term projects such as hydrogen,” says Paas Broekman, “but, as we are now in a gas business, important measures such as methane reduction.”

Although the targeted reduction will be at a lower rate than that achieved between 2016 and 2020, when methane emissions were cut by 24%, ISS ESG agreed that the SPT goes “beyond business as usual” because further reductions will be more challenging to achieve. The SPO provider also found the SPT to be ambitious versus Gasunie’s peer group and against national and EU emissions targets, and noted that the company could revise its target once the oil and gas sector guidance from the Science Based Targets Initiative becomes available.

The second KPI is Gasunie’s Scope 1 and 2 emissions and it has set a variable target for these. 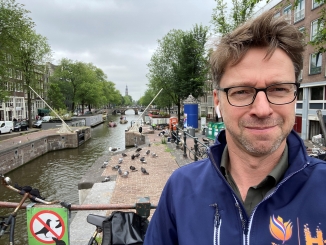 “We had some serious discussions around this during the preparatory phase,” says Loek Caris, investor relations and external reporting specialist at Gasunie (pictured). “It might not be easy selling the idea of a variable target for Scope 1 and 2 emissions, but we firmly believe it’s the right thing to do because we are not in control of the gas flows transiting through our network, so we can only control the amounts of emissions to a certain degree.

“The SPO provider agreed that this was appropriate and investors understood the rationale.”

In terms of kilotonnes of CO2-equivalent, the SPT for 2030 is 70 plus 0.137 times the transported gas volume in terawatt-hours (TWh) (with the 70 being the methane emissions target). According to Gasunie, if the amount of gas transported in 2030 is equivalent to the amount in 2020, then the SPT would imply a 30% reduction in Scope 1 and 2 emissions.

ISS ESG found the SPT to be material and ambitious, although noted that Scope 3 emissions, which represent 34% of Gasunie’s greenhouse gas emissions, are not covered. Caris explains that other companies own the gas flowing through Gasunie’s grids and already add these volumes to their own Scope 3, hence the exclusion of these emissions in Gasunie’s Scope 3 emissions avoids double-counting.

As with the methane KPI, the rate of reduction of the Scope 1 and 2 emissions will be slower than that achieved in recent years, but, again, the SPO provider acknowledged that further cuts will prove more challenging.

As well as affirming that the framework is aligned with the Sustainability-Linked Bond Principles, ISS ESG also confirmed its consistency with ICMA Climate Transition Finance Handbook recommendations, with some exceptions. Ligthart at ABN AMRO notes that Gasunie’s framework is one of only a few that reference the thematic guidance.

“There was no specific need with an SLB structure for them to have incorporated the guidance,” he says, “but they decided to embrace it because the transition is such a part and parcel of Gasunie’s strategy.

“That meant the framework is maybe a bit lengthier than some others,” he adds, “but it’s a comprehensive and transparent framework overall — addressing in detail the KPI trajectories and the risks of not achieving those, for example — and investors mentioned that positively during the roadshow.”

To best highlight Gasunie’s ambitions, the debut sustainability-linked bond incorporated both SPTs, with the 0.75% coupon stepping up 0.10% for each target that is missed on 31 December 2030.

Active joint bookrunners ABN AMRO, Crédit Agricole and ING, and passive bookrunner NatWest, went out with initial price thoughts of the mid-swaps plus 65bp area for a €300m no-grow 15 year transaction, rated A1 by Moody’s. Guidance was then set at mid-swaps plus 40bp-45bp on the back of around €1.1bn of orders, and the deal was ultimately priced at 38bp, and a yield of 0.763%, on the back of a final book above €750m. 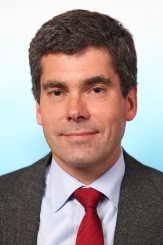 “The book filled up quite quickly and overall it went very smoothly,” says Ton Roeten, head of corporate bond origination at ABN AMRO (pictured). “We saw the new issue premium as approximately minus 1bp, which for the long maturity in a market where inflation fears were raising their ugly head was quite nice.

“If there were any constraints,” he adds, “it was that in some cases investors wanted to participate, but couldn’t because of the sub-benchmark size.”

ESG investors were estimated to have taken some 45% of Gasunie’s sustainability-linked bond (14% considered dark green and 31% light green).

“We are very proud of the framework, but also the deal itself,” says Paas Broekman. “This is the first time we have issued such a long tenor and we were quite excited to see it work so well.”

“In the past, our colleagues were never really conscious of financing instruments and what we do in treasury,” says Paas Broekman, “but we explained that it was important to also include sustainable elements in our financing strategy, and in fact the SLB accelerated our discussions regarding methane emissions and CO2”

Having taken its first sustainable step into the bond market, Gasunie is already eyeing further opportunities, not least as an outstanding issue comes up for redemption in July.

“In the coming months we will look at whether a green bond is doable,” says Paas Broekman, “but I expect we will issue another sustainability-linked bond.

“There is a greater chance that we will then issue a green bond in the following years.”

A pdf of this article and accompanying SLB feature can also be downloaded here.

NN Investment Partners’ green bond offering has this year been boosted by an increase in sovereign activity, while social developments may have opened a gap in the market, according to Douglas Farquhar, client portfolio manager for green bonds, NN IP, even if its reservations about sustainability-linked bonds (SLBs) persist.

Loans to local government bodies large and small are behind SFIL’s green bond issuance, and the French group anticipates complementing this with social lending, according to CEO Philippe Mills and colleagues.