A majority of green bonds offer public information on the use of proceeds after issuance, a new report from the Climate Bonds Initiative has found, with a Blackrock official lauding “tremendous” progress in such reporting. However, more is required in certain areas, with some failing to meet basic guidelines.

The report is based on data on 146 green bond issuers and 191 green bonds amounting to $66bn (Eu57.6bn) equivalent issued up to 1 April 2016. It was produced in partnership with Berlin Hyp, BlackRock and Luxembourg Green Exchange, and presented at a Berlin Hyp event in Frankfurt yesterday (Wednesday).

Guidance on green bond reporting is provided by The Climate Bonds Standard and by ICMA’s Green Bond Principles, which both emphasise the importance of issuers reporting back to investors post-issuance on how proceeds are allocated to projects.

The study found that the majority of issuers provided some degree of public information post-issuance, with compliance found in 74% of the issues by number or 88% by value. Reporting is available for most listed bonds and all bonds over $1bn in size, while private placement and OTC markets have lower levels of reporting. The level of detail and complexity of reporting varies widely.

The study highlighted examples of best practice in several areas of reporting, praising among banks, for example, HSBC for providing a detailed table with all project names, descriptions, allocation of proceeds per project, impact reporting, and more. Berlin Hyp was highlighted in respect of benchmarking in its impact reporting, with the two different baselines it uses showing different degrees of performance.

Toyota was cited as a best practice example with respect to timeliness of reporting in ABS, as the company provides monthly updates on loans made – according to the report, this is far beyond requirements, but helpful in Toyota’s case given the rapidly changing nature of loan volumes.

Ashley Schulten, director and head of climate solutions, fixed income, BlackRock, said impact reporting has been a focus of the asset management firm’s work on green bonds for several years, and noted the developments made.

“In 2014, when we met with issuers of green bonds and pressed for impact reporting metrics we were routinely told how difficult this would be to provide and why,” she said. “Today, this use of proceeds report from the Climate Bonds Initiative reflects the tremendous progress the market has made in this area.

“The development of harmonized reporting guidelines supported by the Green Bond Principles, increased comfort from issuers around disclosure, and positive feedback from investors have paved the way to a significant pick-up in quality of environmental reporting on green bonds.” 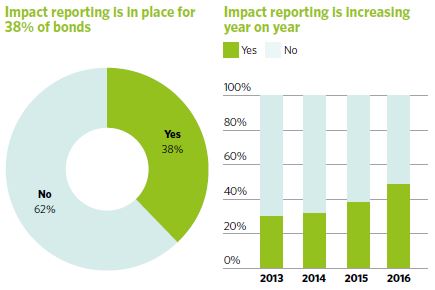 However, the report concludes that additional progress in still required for the market to “maintain its integrity” in certain areas. These include poor comparability between the content and format of reporting offered by different issuers, the failure of some issuers’ reporting to meet basic market guidelines, and the failure to report for around a quarter of the bonds analysed.

“We hope to see this drop to almost zero in future reports,” it said. “In particular, smaller issuers, private placements and US municipal issuers reporting was lower than banks and government agencies.

“While reporting is less important for some assets or issuer types, all issuers should provide at least a basic level of reporting.”

The report said the most likely reason for issuers not reporting is that all proceeds of a bond are allocated at issuance to refinancing existing projects rather than turned over to new projects, as is allowable under the Green Bond Principles but not under all market standards. Other reasons given include that bonds may have been issued before the publication of the Green Bond Principles or that information may have been privately disclosed directly to investors.

The report recommended that smaller issuers with fewer resources focus on basic standardised reporting, and that larger, more frequent issuers show leadership by going beyond basic guidelines. For regulators and standard-setters, it recommends that market guidelines, listing requirements and green bond regulations make clearer what constitutes good reporting, and suggests that a template for basic reporting be published.

“Transparent and solid reporting are a robust foundation for integrity in the green bond market,” said Gero Bergmann, member of the board of management of Berlin Hyp. “If we want to continue sustainable growth in the market and contribute to mobilizing urgently needed private capital for environmental and climate-related projects, we should secure investors’ confidence in green bonds by supporting quality in green bond reporting.

“This report clearly assists in achieving that goal.”

The Day After Tomorrow

Issuers wishing to win over investors with SRI mandates not only need to deliver green and social bonds, but must demonstrate how these fit into a broader sustainability strategy for the future — that was the key takeaway from a Sustainabonds roundtable hosted by SFIL in Paris on 24 May, where the market’s growth, EU initiatives, and pricing were debated.

Green bonds do not yet offer cheaper funding than conventional comparables, according to a report from the Climate Bonds Initiative (CBI) and the International Finance Corporation (IFC), even if momentum reflected in moves from IPTs and secondary performance – notably on an Apple bond – suggests a positive future.