The bank green bond market is primed to continue its rapid growth, according to S&P, with the rating agency highlighting the importance of reporting and transparency in achieving a top green score under its approach.

The rating agency on 2 March presented findings of a review of almost all the green bonds issued by the top 200 banks globally that it rates.

Furthermore, green bonds have not yet become a regular funding channel for many banks, with around four-fifths of the top 200 banks yet to issue a green bond.

“Banks around the world may face peer and investor pressure to ramp up their efforts in the green bond market,” says Miroslav Petkov, head of environmental and climate risk research at S&P. 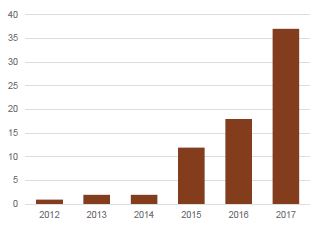 S&P nevertheless points to progress the sector has made in recent years, noting bank green bond issuance has grown from US$1.5bn (EUR1.22bn) in 2014 to US$27bn in 2017, and that over the same period the number of banks having debuted in the market increased from just five to 72. China accounts for 40% of banks to have issued a green bond and 55% of issuance, with Europe accounting for 26% of supply.

The rating agency expects all banks to continue to grow their share of green bond issuance in the near future, citing the Energy efficient Mortgages Action Plan (EeMAP) in the EU and opportunities offered by green securitisation as having the potential to contribute further impetus to market growth.

S&P uses its Green Evaluation tool to assess the positive contribution of green bonds and other financings. It says its point-in-time tool assesses the relative environmental impact of a technology to be financed compared to similar technologies globally, based on the quality of governance and transparency of a transaction as well as a quantification of associated life-cycle impacts. A transaction is then assigned a score of 0 to 100 and the score expressed as a quartile between E1 and E4 – E1 being the highest environmental contribution.

The mitigation score determines 60% of the total score, the transparency scores 25% and the governance score 15%.

Because the issuers reviewed in S&P’s study of the top 200 banks invest predominantly in renewable energy and green buildings, the mitigation score for green bonds they issue is likely to be above 50, a prerequisite for E1-E2 assessments.

In terms of transparency and governance, banks’ green bonds that are aligned with the Green Bond Principles and whose proceeds are predominantly financing renewable energy assets are more likely to receive an evaluation in the upper quartile.

The European Commission launched a public consultation yesterday (Monday) on how ESG factors could be integrated into the fiduciary duties of asset managers and institutional investors, as Valdis Dombrovskis spoke of the importance of private capital in achieving climate targets at COP23.

EEM Label ready to go, could offer ‘bridge’ to Taxonomy

The Energy Efficient Mortgage Label will be launched on 12 February, offering a platform for lenders to provide data and transparency around green products and providing a “bridge” towards a greener market and potentially higher Taxonomy standards, according to the EMF-ECBC’s Luca Bertalot.

Deutsche Hypo sold a EUR500m green Pfandbrief issue last Monday, its second such benchmark, and officials at the issuer described the deal’s “dynamic” book as being a positive statement of green investor’s trust.