La Banque Postale inaugurated a green, social and sustainability bond framework last week and attracted twice as many investors to the EUR750m 10 year green senior non-preferred bond than its last conventional SNP. Issuance in social and covered bond formats is set to follow.

The subsidiary of France’s state-owned La Poste announced the mandate for the planned deal on 1 April and held a roadshow the week before launch.

Leads BBVA, Crédit Agricole CIB, ING, Natixis and SG then opened books on Monday morning (15 April) with initial price thoughts of the mid-swaps plus 100bp area and were able to tighten pricing to 85bp over with more than EUR2.5bn of orders good at that level, and the size was set at EUR750m.

Both green and non-green new issues from financial institutions have been sold without paying a premium over secondary curves in recent weeks in a bullish market, and La Banque Postale’s deal even came 2bp through fair value.

“Given the current environment and perhaps a lack of supply in the recent weeks, we benefited from very positive market conditions, too,” Dominique Heckel, head of long term funding at La Banque Postale, told Sustainabonds. “I would say the price outcome is not necessarily because of the greenness of the bond, but a kind of equilibrium between supply and demand, with there being a lot of liquidity to be invested in the market.”

However, he said the green nature of the bond contributed to this dynamic in attracting a greater number of investors to the offering.

“If we compare this to the 10 year senior non-preferred we issued last year, we have twice as many investors in the book,” said Heckel, “which shows how you get much more traction from the investor base with the green format.”

According to the leads, the deal attracted strong interest from ESG-driven and green investors. Asset managers were allocated 52% of the paper, insurance companies and pension funds 40%, central banks and official institutions 4%, banks and private banks 3%, and others 1%. French accounts took 52% of the issue, Germany and Austria 16%, the Benelux 12%, the UK 6%, the Nordics 6%, southern Europe 6%, and others 2%.

La Banque Postale’s framework allows for the issuance of green, social and sustainability bonds (the latter including both green and social uses of proceeds), and the issuer chose to debut in green format because investor feedback and advice from its lead managers, particularly sole green bond structuring advisor Crédit Agricole CIB, suggested the greatest diversification could be achieved through a green bond, according to Heckel (pictured, right, with colleagues on their roadshow). 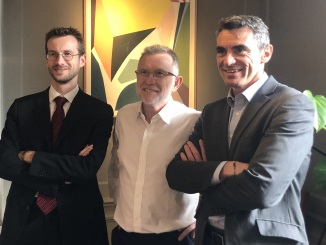 “And we had a specific focus on renewable energy because those assets are also very straightforward for investors and it’s quite clear how to measure the impact of those projects,” he added.

La Banque Postale will now be a regular issuer in the market with deals off its green, social and sustainability framework, in covered bonds as well as senior issuance, according to Heckel, although its next deal may not be until 2020.

He said the framework is a natural fit for the issuer.

“La Banque Postale is very committed towards its role in social business and its public service mission linked to its ownership by La Poste,” said Heckel, “so this is perfectly in line with the DNA of the bank trying to be a responsible bank. In that respect, it is really very important for us to put forward financing of renewable energy, low carbon buildings, new homes for our retail clients, and at the same time some very specific social finance, like social home ownership – that is why we designed not only a green bond framework, but a mix of social and green bond issuance.

“At the same time as growing our presence in the green and social bond market, we will be growing those areas we have included in our framework. Investors recognised that the framework is aligned with the commitment of the bank to responsible finance and were very positive about that.”

As well as more common categories such as renewables, “inclusive finance” is a feature of the framework, and Estelle Maturell Andino, head of group financial communication at La Banque Postale, said the framework allows the issuer to highlight such a specific but important mission.

“As Dominque mentioned, we have a social role and La Banque Postale has a commitment to each and everyone,” she said. “With inclusive finance, we are sponsoring some micro-credit institutions, and all those loans or credit lines are already eligible in our portfolio.

Europe’s largest mortgage covered bond issuer, Nykredit Realkredit, is to join compatriot Realkredit Danmark in issuing green covered bonds, with the Danish model meaning that cheaper financing costs will be passed on directly to end-borrowers, among whom Swedish clients are “leading the pack”, the issuer’s IR head told Sustainabonds.

Kutxabank successfully sold a Eu1bn 10 year social cédulas hipotecarias yesterday (Monday), the first SRI covered bond from Spain, but an official at the issuer said that it had to take into account investor feedback and offer a substantial premium to ensure it could meet its goals.