The new issue was described in screen announcements as a “social bond with a focus on Covid-19” and is only the second Covid-19-related issue from a non-government-related bank, after Spain’s BBVA had the previous Wednesday (27 May) sold a €1bn five year senior preferred social bond that attracted some €4.6bn of orders.

“When we started working on our sustainable bond framework last year, the idea was to be able to come to the market at least once a year with either a green or social bond,” said Laurent Gestin, investor relations at Arkéa, “and so it was an objective for 2020 to follow up on our very successful first social bond.

“It’s a clear target of the group’s strategy to move towards a banking and insurance business that is more aligned with the concerns of society regarding the environment and social issues.”

The issuer then saw the opportunity to use its framework for an issue focused on the impact of the coronavirus pandemic.

“Because of the crisis situation,” said Gestin, “we thought it would be good to come with a social bond but add the Covid-19 focus, with a large portion of the proceeds allocated to loans related to healthcare and SMEs, which are two classes of assets directly impacted by the crisis and already eligible for our framework.”

The two main categories of use of proceeds within Arkéa’s framework are territorial economic development – loans to SMEs – and health and care – loans to finance healthcare centres, including public hospitals, and medical-social centres, while social housing and education loans may also be considered.

Arkéa’s and BBVA’s Covid-19-related bonds come after a series of similarly themed deals from sovereign, supranational and agency issuers, while Caffil, the covered bond issuer of French agency SFIL, in late April issued the first Covid-19-themed social covered bond. Guidance as to how social bonds might be used to support Covid-19-related efforts was also released by the International Capital Market Association (ICMA), which manages the Green & Social Bond Principles.

Gestin (pictured) said Arkéa discussed its plans with its lead managers and was confident that the message would be well received. 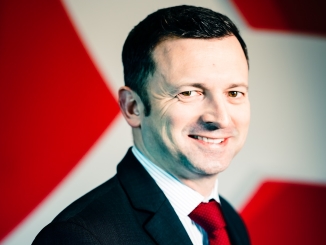 “Supporting our customers, companies and other sectors in the territories where we operate is part of our raison d’être,” he said, “and we were keen to communicate just how important this mission is for us.”

On Thursday morning lead managers ABN Amro, Crédit Agricole, Crédit Mutuel Arkéa, Santander and UniCredit went out with initial price thoughts of the mid-swaps plus 180bp area for the nine year non-call eight euro benchmark senior non-preferred issue. Arkéa was able to price the issue at 150bp over and size it at €750m on the back of more than €2.7bn of orders, with the pricing deemed 5bp-10bp inside fair value.

“The demand was tremendous,” said Gestin. “We’d announced a benchmark size at the start, and this level of demand allowed us to print €750m, which is the largest amount we’ve issued in senior non-preferred format, so in that respect it was a clear success. The size of the book and the lack of price sensitivity also allowed us to reach 150bp, which was a strong outcome.

“We were very pleased with the quality of the accounts who supported us, including some big orders from those we regularly visit. And 60% of the distribution was to non-French accounts – although that has become usual for us, with all the work we have done to convince investors in Europe and further afield of the strength of the Arkéa signature.”

French accounts were allocated 40% of the issue, the UK and Ireland 19%, Germany and Austria 15%, the Benelux 11%, Italy 6%, Switzerland 3%, Iberia 3%, and others 3%. Asset managers took 77% of the issue, insurance companies and pension funds 14%, central banks and official institutions 5%, and banks and private banks 4%.

Arkéa’s attention will now turn to allocating the proceeds on the promised areas.

“We will pay close attention to funding the right projects and loans,” said Gestin, “and make sure that when we are reporting in a year’s time, we’ll be able to show investors that this transaction had a real impact for our territories and customers. Following the issue we did last year, a lot is being done within Arkéa to improve all our IT systems and procedures to make sure that at the end of the day we’ll have a strong ability to report on non-financial performance via a wide range of indicators and demonstrate our real impact on the ecosystem in which we operate.”

Since the onset of the crisis, Arkéa had already issued two regular bonds, a €750m seven year senior preferred on 28 April and a €1bn 10 year covered bond on 26 May. Gestin said that although the issuer has participated in the European Central Bank’s TLTRO III, its funding programme has not been significantly affected by the crisis, while it also did some prefunding in 2019 and then stayed away from the market in the first quarter.

One of the reasons for the new €750m senior non-preferred issue is to support Arkéa’s ratings as it seeks to split from the main Crédit Mutuel group.

“Both Moody’s and Fitch have written papers explaining what will happen when Arkéa is independent,” said Gestin, “and issuing the right layers of Tier 2 and senior non-preferred debt helps maintain a large cushion of subordinated debt to help support our senior preferred rating.”

Arkéa’s senior preferred debt is rated A3/A by Moody’s and Fitch, and its senior non-preferred Baa1/A-.

The use of renewable energy assets as covered bond collateral under a proposed Luxembourg framework would bring extra risks versus traditional collateral, according to Moody’s, but the rating agency highlights various mitigants and says the law is overall credit positive for funding such assets.