Demand from international and ESG-related investors boosted demand for a EUR500m five year senior preferred green bond debut from UBI Banca on Wednesday, as the Italian bank took the opportunity to showcase the activities encompassed in its green, social and sustainable framework.

Leads Banca IMI, BNP Paribas, Crédit Agricole, Credit Suisse, UBI Banca and UniCredit went out with initial price thoughts of 170bp-175bp over mid-swaps for the EUR500m no-grow five year senior preferred deal on Wednesday morning. A little less than two hours later they reported books had passed EUR1bn, and then after around two hours and 10 minutes revised guidance to 150bp-155bp, will price in range, on the back of some EUR1.4bn from around 130 accounts. The deal was ultimately priced at 150bp over mid-swaps – equivalent to around 15bp inside Italian government bonds – on the back of some EUR1.5bn of demand from around 150 investors.

“Our goal was to issue only EUR500m and the EUR1.5bn book exceeded our positive hopes,” Giorgio Erasmi, head of funding at UBI Banca, told Sustainabonds.

According to Vincent Hoarau, head of FI syndicate at sustainable structuring advisor and roadshow coordinator Crédit Agricole, a very significant share of the distribution was to investors with dedicated green/ESG mandates, who he said clearly appreciated UBI’s overall strategy and commitment to play a regular role in sustainable finance.

Erasmi said that attracting investors with a focus on ESG investments was a positive consequence of the green bond, with the issuance giving UBI Banca the opportunity to highlight to investors what it is doing in sustainability.

He noted, for example, the bank’s use of renewable energy, and that furthermore it has a division dedicated to supporting the “third sector”, promoting and supporting non-profit organisations with social impact investments.

“Our green and social activity is well known in Italy,” said Erasmi (pictured), “but this aspect was not widely known elsewhere, and our green, social and sustainability framework gives us an important opportunity to show investors evidence of this.” 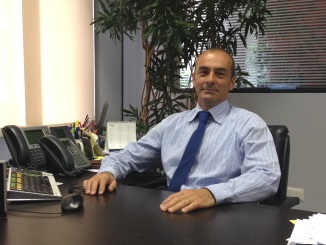 Hoarau at Crédit Agricole said the green nature of the transaction boosted the international appeal of UBI’s offering, which was rated Baa3/BBB-/BBB-/BBB.

“The fact that they are coming to the market with an investment grade instrument that nevertheless offers a modest premium for being an Italian bank, combined with the green element, helps to crack open a lot of doors,” he said.

The 150bp re-offer spread was seen as being flat to fair value, based on UBI’s curve and comparables such as Mediobanca, and Hoarau said the green format helped with the strong result. Mediobanca paid a new issue premium of around 2bp for a EUR500m long five year senior preferred deal on 26 March.

Although the green nature of UBI’s issuance helped narrow any new issue premium, Erasmi noted that this is offset by the costs relating to green bond issuance.

“So net-net, you probably don’t gain anything as a bank from a merely economic point of view,” he said.

Broader market developments meanwhile meant that UBI Banca achieved a much tighter spread than would have been possible when it announced its framework in December. Since the beginning of the year credit markets, and Italian spreads in particular, have rallied strongly. UBI Banca’s outstanding October 2022 senior preferred bond tightened from 260bp-270bp in January to around 120bp-130bp at the time of the new issue.

“Talking with investors, there is a lot of liquidity in the market,” said Erasmi. “As long as the ECB maintains its stance of providing abundant liquidity, this will be a positive support.

“Yes, we have European elections in May, but at the moment we are not seeing any impact in terms of volatility.”

UBI’s green bond is dedicated to refinancing a renewable energy project finance portfolio and has a second party opinion from ISS-oekom.

A first offshore public benchmark Climate Bond for Westpac on 16 November allowed the issuer to access the more mature European SRI investor base, according to a funding official at the Australian bank, after it emphasised its sustainability track record on a roadshow for the EUR500m seven year green bond.

A debut EUR500m green Pfandbrief for Deutsche Hypo went “perfectly” yesterday (Thursday), according to head of funding and investor relations Jürgen Klebe, who said the deal reflected green moves in the bank and helps prepare for a post-CBPP3 market, with annual issuance planned.