The French group unveiled its green bond issuance plan on 21 November and followed up with a roadshow across Europe from 23 November, stating that a fixed rate intermediate maturity senior preferred bond could follow.

Sole green structuring advisor and sole bookrunner Crédit Agricole CIB opened books for the Crédit Agricole SA issue on 28 November, venturing into markets that had been hit by volatility and where many investors were either staying on the sidelines or sticking to defensive instruments.

The French bank went out with initial price thoughts (IPTs) of the mid-swaps plus 65bp area for a benchmark-sized five year issue, rated A1/A+/A+. Books were above EUR1bn in less than two hours and above EUR1.4bn, with over 90 accounts involved, after a little over three hours, when guidance was set at 55bp-60bp over and the size at EUR1bn. Half an hour later the books were closed and pricing set at 55bp over.

Vincent Hoarau, head of FI syndicate at Crédit Agricole CIB, said the pricing incorporated a new issue premium of around 12bp, less than the 15bp-25bp that comparable senior preferred and HoldCo supply had paid in the preceding week, even in shorter maturities.

“I believe CASA suggests that a ‘greenium’ does exist,” he said, “even if it is limited to 2bp-3bp for core names with strong ratings in these markets. Although the underlying risk and other parameters are the same, there is a growing imbalance in the green demand/supply dynamic due to the massive pressure the buy-side is under to invest in green or sustainable assets.

“In the primary market we see greater traction among investors for green bonds because they are less price-sensitive, being ready to give ground to get the green element. They also anticipate better secondary market performance, with green bonds tending to be smaller and placed in safe hands, while traders will short conventional bonds before going short a small green bond.”

Hoarau noted that there was less movement between IPTs and final pricing than on some issues by design, saying that investors have been irritated by large movements in pricing.

“We started closer to where we thought the bonds belonged,” he said, “i.e. less NIP to start with, but also less tightening, showing greater sensitivity to investors’ requests, while the issuer ultimately achieved a more competitive outcome than peers.”

Philippe Brassac, Crédit Agricole SA CEO (pictured), said the size, nature and granularity of the bond is likely to make it “a benchmark operation in the banking landscape”. 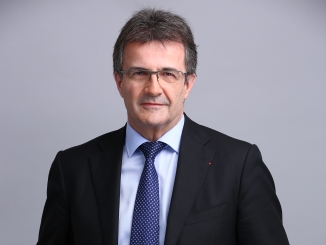 “The economy and finance can and should become powerful allies in order to achieve the objective of carbon neutrality by 2050 as set out in France’s Climate Plan,” said Brassac. “This green bond issuance will enable us to forge ahead with our commitments.”

Landesbank Baden-Württemberg (LBBW) issued the first green senior non-preferred sterling benchmark on 22 January, a £500m five year deal in which a maturing ESG UK investor base considered both LBBW’s green bond and issuer credentials, according to those involved in the deal.