DZ Bank sold its first green bond on 25 September, a EUR250m five year deal with proceeds earmarked for German onshore windfarms that marked a rare appearance in the public markets for the German issuer in senior format, and which is the first green bond from a bank to have an S&P Green Evaluation.

As the central bank of Germany’s cooperative banks, DZ usually sources liquidity from private placements within the sector, with the zero risk weighting of its debt for members meaning DZ can thereby achieve very favourable funding levels.

The new issue was therefore its first appearance with a senior bond in the public markets for at least 15 years, according to Andreas Armyros, leadership capital and financing at DZ Bank, as the bank took the strategic decision to do so to enter the green bond market.

The transaction comes amid a flurry of German sustainable bond activity, with Commerzbank, for example, preparing a debut green bond in senior non-preferred format.

Armyros said DZ chose a senior preferred issue so that it could focus on the green aspects of the bond, rather than having to also discuss topics such as MREL requirements. The format was also chosen to appeal to the targeted investors.

“We expected most of our investors to be funds or banks,” he told Sustainabonds, “and senior preferred is a very safe instrument, with an excellent rating of Aa1/AA-/AA-, and also ECB-eligible. So that’s why we chose a senior preferred instrument, and why you are seeing something that we don’t usually use for public issues.”

The use of proceeds is German onshore windfarms, which have become a regular feature of the green bond market.

“We didn’t focus on being too innovative,” said Armyros (pictured), “but rather on quality. We thought that for an inaugural issue you should come with an undisputed asset class, and onshore German wind energy is a very highly regarded sector – thanks to German construction and environmental laws, investor are sure that everything is done properly and there are no deficits in terms of greenness.

“This was really appreciated by the investors.” 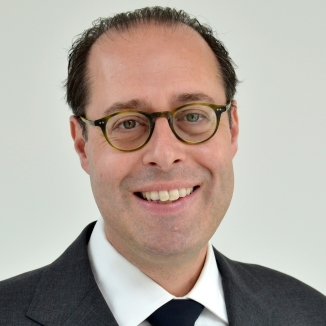 Itself acting as sole bookrunner, DZ Bank attracted some EUR330m of orders from 61 accounts to the five year senior preferred issue, whose size was fixed at EUR250m from the outset.

Alongside 70% distribution to cooperative banks, 21% was placed with other banks, 5% with agencies, 3% with insurance companies, and 1% with asset managers. Germany was allocated 96%, and Austria, France, the Netherlands and the UK 1% each.

“A lot of the investors – especially those from outside Germany – were dedicated funds for green investments,” said Armyros. “We were very happy to see that some of these were buying our bonds for the first time and required, for example, detailed one on one calls with us, while other, German investors that we see from time to time in our private placements showed up in size because they have a green focus.”

“As discussed, we haven’t been in the public market for senior debt for years and from treasury’s perspective, we didn’t want to pay more for the green bond just because it’s a green bond or just because it’s a public deal,” he said. “Meanwhile our sales team were perfectly right in saying that we shouldn’t try to tighten our pricing with our inaugural green bond. So after a lot of discussions we decided to compromise, saying, OK, we will stick to the curve as it is.

“I would like to say it worked perfectly well for us,” he added, “because it was oversubscribed and from our point of view a huge success.”

Having focused on a straightforward instrument and use of proceeds for its debut, DZ Bank and its subsidiaries could in future add other asset classes and issue other instruments, said Armyros.

“A very important strategic goal for us in doing this first green bond was to get the in-depth knowledge about doing a transaction by yourself,” he added, “and now we will use it for the analysis internally. We don’t have precise plans in place now; what we are doing is analysing, discussing and sharing our knowledge with our colleagues, and then we will see what will be the next step we could take.”

Work on the programme involved personnel with a distinct sustainable focus from diverse departments – such as structured finance, communications, investor relations, research, institutional clients and legal – as well as treasury, and Armyros said the experience overcame some of his personal scepticism towards what he had previously heard about green bonds.

“The market is always saying that if you embark upon a green bond, it really has an impact on the organisation, and I was always suspicious about that,” he said. “But indeed now people see the bank is serious about this and people from different departments are coming up with their own green ideas and insights.”

DZ, S&P rate each other highly

DZ Bank chose S&P Global as its second party opinion (SPO) provider, and is the first bank to have done so.

Under its Green Evaluation methodology, S&P assigned DZ’s green bond a score of E1, the highest in its E1 to E4 range, based on an overall score of 85 (out of 100). The latter is based on a weighted average of scores for transparency, governance and mitigation, for which DZ’s green bond received 84, 78 and 87, respectively.

“We like the Green Evaluation approach very much,” said Armyros. “They also have a lot of experience in the capital markets space, deep knowledge of project finance including windfarms, and expertise in sustainability through their subsidiary Trucost.”

He noted that as an issuer DZ Bank has, for example, ISS-oekom (Prime, C+) and Sustainalytics ratings.

The “strong” mitigation score of 87 reflects the significant positive environmental impact of the underlying wind power plants, according to S&P.

“We assess Germany’s grid carbon intensity as ‘medium-high’, and we expect onshore wind to play a vital role in its systemic decarbonisation,” it said.

The green bond asset pool includes loans made to 60 projects between 2010 and 2017, which are all expected to be outstanding for the duration of the five year issue. S&P noted that in 2017 the portfolio, with a total installed capacity of about 738 megawatts, avoided greenhouse gas emissions amounting to the equivalent of about 790,000 tonnes of CO2.

“Banks play a pivotal role in our economy, in capital allocation, specifically to energy and infrastructure, and so we are quite excited to see banks going down this route at the moment,” said Joest Bunse, associate director at S&P Global, who evaluated the bond.

Caffil healthcare social bond due, ahead of green, SFIL options

Caffil is roadshowing a social bond that is set to be the first social or green covered bond from France, with the proceeds refinancing loans to public hospitals, and the group plans to follow up the debut with green covered bonds later this year and potentially social issuance from parent SFIL.

QBE put gender equality centre stage when it sold the first capital instrument from a financial institution to be in social bond format on 9 November. Here, QBE group treasurer Paul Byrne discusses the inspiration for the landmark and its execution.