The European Union issued its first green bond to unprecedented demand yesterday (Tuesday), raising €12bn in the largest green bond ever, a 15 year deal that attracted over €135bn of orders, representing an endorsement of the Commission’s ESG direction.

The landmark is the first in EU plans to issue up to €250bn in green bonds between now and end of 2026, making up 30% of its planned €800bn of NextGenerationEU (NGEU) pandemic recovery issuance, which is set to make it by far the biggest green bond issuer globally.

“This is a strong start for the NextGenerationEU green bond programme,” said Johannes Hahn, EU commissioner in charge of budget and administration (pictured). “Set to turn the EU into the world’s biggest green bond issuer, it is a powerful signal of the EU’s commitment to sustainability. Our future is green, and it is extremely important that we seize the opportunity to clearly show to investors that their funds will be used to finance a sustainable European recovery.”

Lead managers Bank of America, Crédit Agricole, Deutsche, Nomura and TD announced the 15 year deal for a size of €12bn at guidance of mid-swaps minus 5bp, and built a book of over €135bn, ultimately pricing the transaction at minus 8bp and a yield of 0.453%, equivalent to 31.6bp over the May 2036 Bund and 4.6bp through the May 2036 OAT.

The inaugural EU issue takes over the mantle of the biggest green bond from the UK, which briefly held the record after selling its first green Gilt on 21 September, a £10bn (€11.77bn) 12 year deal.

The Commission says its green bond issuance will allow it to diversify its investor base while offering the market a highly rated and liquid green asset that it hopes will inspire other issuers to follow, and yesterday’s debut was widely welcomed by market participants.

“First of all, it shows that there is a huge demand and a lot of cash from the investor side laying, waiting for green bonds to come into the market,” Mehdi Abdi, head of fixed income at Actiam, told Sustainabonds, “and it doesn’t matter whether it is sovereign, sub-sovereign or covered. So for all issuers who are in doubt, this deal shows that you should not be, because there are a lot of investors who want to participate.

“Secondly, the EU itself is a supranational that is creating a lot of rules around sustainability, which is key, and it is really good to see them now committing themselves with the green deal.” 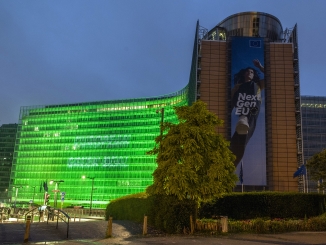 The NGEU green bond framework was adopted on 7 September and is in line with the Green Bond Principles, administered by the International Capital Market Association (ICMA), with a second party opinion provided by Vigeo Eiris.

The use-of-proceeds are eligible green projects under the Recovery & Resilience Plans (RRP) of EU member states, where steps to achieving 2030 and 2050 climate targets must be outlined, with a minimum of 37% of every RRP devoted to the green transition. Examples include a research platform for energy transition in Belgium, and the construction of wind power plants on land in Lithuania.

The Commission says the framework has been aligned with the forthcoming EU Green Bond Standard “to an extent feasible” and has highlighted alignment with the EU Taxonomy and related do-no-significant-harm (DNSH) criteria. Some market participants have suggested the EU framework could have gone further in this respect, but many are satisfied with the efforts.

“With the solid regulatory structure the EU is building and the emphasis on the DNSH criteria for investments, there is a strong focus on ensuring that the proceeds of this bond will be used for truly green investments,” said Oscar Jansen, who manages a portfolio of euro-denominated credits at APG, which invested €195m in the new issue.

Abdi said the EU framework came in at the lower end of those Actiam accepts as green bonds, achieving the minimum 75 out of 100 required under its internal scoring system.

“There were some question marks regarding the framework from our ESG team – it gets the green label, but it’s not the best out there,” he said.

Market participants saw the new issue around flat to fair value based on outstanding EU paper, but several noted that this was a better outcome than usual – with new issues including the EU’s past syndicated deals typically paying a couple of basis points of new issue premium – thereby declaring a “greenium” of up to 3bp, while the new issue also tightened as much as 3bp in the aftermarket. ING rates strategists said that whether or not the EU’s final syndicated bond of this year is a green bond will be an important factor in whether the greenium increases or decreases.

“If it is, then we expect the EU greenium will continue to be relatively small compared to that of, say, Germany,” they said. “If this ends up being the last green deal of the year, then the EU greenium should be able to catch up to Germany’s.”

The EU has plans for €80bn of NGEU issuance this year, with €68.5bn completed after yesterday’s transaction. The remaining €11.5bn will be divided between the remaining syndication, set for the week commencing 8 November, and an auction slot in the week of 22 November.

Sparebanken Sør Boligkreditt sold its first green covered bond on 17 October, a €500m seven year trade that inaugurates the first green and sustainability bond framework from a Norwegian bank, which takes in social activity in emerging markets, and a new green mortgage highlighted by an official at the issuer.

OP Mortgage Bank issued the first Finnish green covered bond yesterday (Thursday), a €750m deal with proceeds earmarked for energy efficient buildings that achieved a peak €1.6bn-plus book and the tightest 10 year spread since May 2019 – “a great outcome,” according to head of funding Tom Alanen.