How does the guidance consultation launched last month fit into the overall energy efficient mortgages initiative?

The conceptual approach to the energy efficient mortgage initiative is first of all to give a kind of definition of what we are speaking about — what is an energy efficient mortgage? In this latest exercise we sought to create guidelines that are comprehensive enough to cover the different key aspects of the product — principles for the banking process, principles for the energy efficiency parameters, and then the valuation parameters. We want to make sure that we are getting this right, and that every single corner of the market will have the opportunity to give their input and to make sure that this guidance is complete — and also able to be implemented as soon as possible. And we want to adopt a gradual approach for the initiative — we are after all working with a market that is evolving, so the initiative should be flexible enough for us to move forward as one in the coming weeks and months.

That’s what we would like to achieve and is why we are going around the different countries, creating roundtables, putting all the stakeholders in the same room. We have, for example, just had the first meeting of EeDaPP, and asked the system providers to liaise directly with the banks who have already shown an interest in the pilot phase as soon as possible, because the IT solutions should really come in the initial stage. We are closing the market consultation on 12 March, but we will be continuing with roundtables. So we are building this channel of communication between the different stakeholders, using the EeMAP conceptual note as a kind of common framework.

We would like to close these discussions in June, and then say, OK, now let’s all work together and put down whatever is needed to give life to this instrument — somehow and somewhere. That’s the idea. We already have 35 banks, more or less, that are part of the discussion, which is very encouraging.

What exactly will banks in the pilot be doing from June?

We are simply asking the banks to take the final EeMAP guidelines that we will be issuing and analyse if it is possible to implement them in their banks. They should create a taskforce in the bank probably including a marketing officer, a risk officer, a funding officer and a retail officer — these four components of the bank should be represented — and try to analyse if it will be possible to implement this in their business line, and if it will be convenient. It’s a quite simple approach. 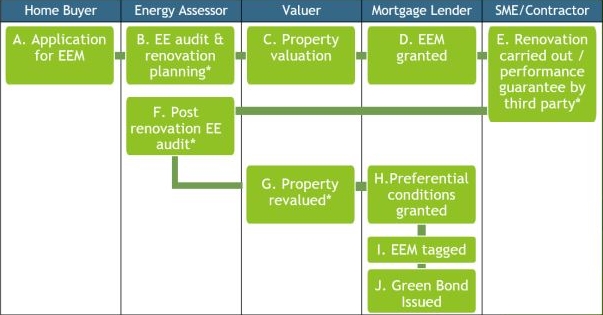 *B (renovation planning), E, F & G are only relevant in the case of renovation. An audit could involve the issuing of a new Energy Performance Certificate for a residential property, although more comprehensive audits might be considered for commercial properties. Source: EeMAP

You mentioned the retail officer — so this is actually to try to see if you can reach the practical stage where, if I wanted to take out a mortgage, I could walk into a bank and be offered the option of an energy efficient mortgage, which I suppose is the ultimate goal?

Not taking any action, not creating an evolving system able to capture this consumer demand will really be a missed opportunity with a huge opportunity cost for this industry, which will see the collateral in its portfolio becoming obsolete. It could be a serious problem for our industry if we do not create a mechanism for banks to improve their collateral stock.

I guess people in the UK people will do anything they can to be able to better afford a house.

Having a special amount of money that will be made available only for energy efficiency improvement or enhancement — it’s an important issue. If you look at house prices around Europe, a young couple buying a house will simply use all the money they have for the down-payment, so protecting a buffer for energy efficiency improvements is essential so as to allow such buyers to make such renovations. If you miss that window of opportunity, you also miss the chance of renovating that apartment, and you miss the chance of improving the life of the people living there. Meanwhile you create an element detrimental to the value of the property, because that apartment can become obsolete much easier than another one that has been renovated at the time of the purchase.

How long do you envisage the pilot lasting?

We should collect data for at least a couple of years.

Now, it’s difficult to say when the first bank will be able to deliver a green product. I think no one can answer this question. But we see that our banks are really dedicating a lot of attention to this and already trying to implement the EeMAP guidelines in their business lines and trying to think how this can be feasible. I always say that I don’t think that we will see a green product before 2019, but once the guidelines are out there, banks know what we are doing, and they could follow us quite easily.

To what extent could the initiative be boosted by the introduction of a so-called green supporting factor, which the European Commission is exploring?

There are two schools of thought here in Brussels. One that thinks it is necessary to have a green supporting factor for certain specific assets — one of which is definitely energy efficient mortgages. And others are somewhat against it, saying that we should not create a free lunch.

I think that the way to put these two schools of thought on the same page is to create a correlation between energy efficiency performance and financial performance.

There are already analogous concepts in the market. If you buy a new car and you want to save a bit of money on the insurance, what do you do? You get a satellite tracker, and if you demonstrate that you are a safer driver, that you drive less than another driver, you pay less in terms of premium. So the same concept that is already commercially implemented in another sector should be also implemented in the mortgage business, in the sense that if you are a safer borrower, if your collateral is safer than another, you should have a realignment of the capital charge premium. That’s very simple. And we are not asking more than this, so it’s not a free lunch; it’s simply creating a correlation between energy efficiency performance and financial performance. That’s the real scope of the pilot phase.

Some people have also said that they are sceptical that a green supporting factor would actually make much of a difference to banks, and therefore there is not much point in doing it.

The benefit that you might have is minimal if you look at only one of the single benefits, so, yes, it is not enough by itself to activate this machine. But this machine is based on several carrots, I would say, for every single stakeholder. Consumers will have a strong interest, so there is a consumer boost, which then will make the banks more comfortable for three reasons. First of all, for marketing reasons — they will open up access also to the wealth of the borrowers’ families. Secondly, having a capital charge discount for this operation — and we would also like to achieve more favourable funding treatment, by implementing special treatment for Solvency II, for LCRs, for example, in the long term. And thirdly, this will open the door to new investors, offering banks another way to manage the exit from QE. We know that several central banks are receiving mandates to buy green paper and the big problem is that there is not enough green supply at this point in time.

And I’m always a bit concerned about the urge to regulate everything.

If the market does not take the initiative, there is a big risk that someone could think of regulating these sectors before they take off, which would be a killer.

So the fact that we have a strong market initiative — which is European, for sure, but also seeing appetite globally, in Singapore, Canada and elsewhere — it will really put the market in the driving seat rather than the passenger seat, and will help us influence any regulatory tsunami hitting this business. I’m a bit concerned about what could be announced in terms of regulation, particularly given that this green market is yet to develop and regulating a market before it has appeared is always a challenging exercise, to put it mildly.

You are talking about a pilot phase lasting perhaps a couple of years, but people are urging action to tackle climate change today. And we have already seen deals for SpareBank 1, Barclays, LBBW, Berlin Hyp and others related to mortgages. Are you also working on more immediate action?

And for a couple of years now this subject has been regularly discussed in the steering committee of the ECBC, and we have a kind of green think-tank within the EMF side. Of course all these banks are also a part of our current debate.

So we want to give visibility to these pioneering issuers, but at the same time give clear guidelines on how this can be grown in the future.

The parameters for these deals have been completely different in different countries, and there is a need for guidelines on the asset side and then on the liability side, the bond side. These bonds are also green bonds — or social bonds — and we are building an energy efficiency initiative, which is a bit different. And if we want to achieve the better capital treatment, we have to create this link to energy efficiency — it cannot be only green; it should have a tangible “cog” behind this.

Westpac sold its first offshore Climate Bond yesterday (Thursday), a EUR500m seven year senior unsecured deal, and its green status was deemed to have aided pricing in a weaker market and versus recent comparable Australian supply.

Rabobank recently aligned its green bond framework with the latest draft of the proposed EU Green Bond Standard and Sustainabonds spoke to Maarten Biermans, head of sustainable capital markets at the Dutch bank, about the issuer’s support for the initiative, notably the “do no significant harm” principle.

The EMF-ECBC is hoping to gain European Commission support and funding for developing a data protocol that would help optimise its energy efficient mortgages initiative, although a speaker at a plenary meeting of the industry body warned that “the best is the enemy of the good”.