The European Commission is “looking positively” at reducing capital charges to boost green loans such as energy efficient mortgages, Valdis Dombrovskis said today (Tuesday). A draft definition for such loans is due in February ahead of an EeMAP pilot phase that could support such a move.

Participating in a panel at the One Planet Summit in Paris today (Tuesday), Dombrovskis, vice president, European Commission (pictured above), said the Commission will present a comprehensive action plan in March to lay the foundations for sustainable and green finance to reach its potential, following the presentation of the final recommendations of a High-Level Expert Group on Sustainable Finance (HLEG) in January.

Among the measures that are being considered in the action plan are methods to incentivise green lending, he said.

“European banks play a major role in financing the economy,” he said. “To incentivise lending, we are looking positively at the European Parliament’s proposal to amend capital charges for banks to boost green investments and loans by introducing a so-called green supporting factor.

In a tweet, Dombrovskis added that these lower charges could make it cheaper for “green-minded households” to get such mortgages and other loans.

Energy efficient mortgages have been proposed by the European Mortgage Federation-European Covered Bond Council (EMF-ECBC) as a product that lenders can offer to borrowers seeking to purchase and retrofit energy efficient properties. The EMF-ECBC and partners launched the Energy efficient Mortgages Action Plan (EeMAP) in September 2016 and are soon to launch the Energy efficiency Data Portal & Protocol (EeDaPP) initiative.

Together, these initiatives aim to introduce an energy efficient mortgage product, which will soon be piloted by banks, and deliver data-gathering, processing and disclosure capabilities in respect of these loans via a standardised reporting template.

“It is an important recognition of the work done under the Energy Efficient Mortgages initiative, and it is setting the scene for more work,” he said.

“We are delighted to contribute to the energy efficiency agenda of the Commission, which for us is linked to the idea of the Capital Markets Union by building one single asset class in terms of Energy Efficient Mortgages, but also provides the pre-conditions to create green covered bonds and green securitisations and use this green collateral in the proper way.”

Bertalot told Sustainabonds that the EMF-ECBC will at the end of February publish a draft definition of Energy Efficient Mortgages for public consultation. The final definition will then be published in June, after which the EMF-ECBC will ask banks to actively participate in a pilot phase by following EeMAP working streams that ultimately aim at collecting a comprehensive data set at European level.

The so-called “green supporting factor” has also been promoted by others in the finance industry, for example the Fédération bancaire française calling for its introduction to accelerate the transition to green energy.

However, several regulators and experts have previously cast doubt on the likelihood of lower capital requirements being introduced for green assets, with some suggesting that moves to penalise climate risks and stranded or brown assets would be technically easier than any such easing of requirements.

In October, Bank of England governor Mark Carney said the direction of travel could be heading in the way of capital relief for green assets, but suggested a lack of performance data for green assets could hinder their case. Carney also participated in the panel discussion in Paris today, but did not comment on Dombrovskis’ announcement regarding capital requirements.

According to the EMF-ECBC, Martin Koch, policy officer, DG FISMA, European Commission, said in a meeting of the Energy Efficiency Financial Institutions Group (EEFIG) today that EeMAP and EeDaPP have the potential to lead the way in providing evidence that would justify lower capital charges for green mortgages and green covered bonds.

“The green supporting factor has been considered very controversial, but there is room to manoeuvre for our pilot phase,” said Bertalot (pictured below). 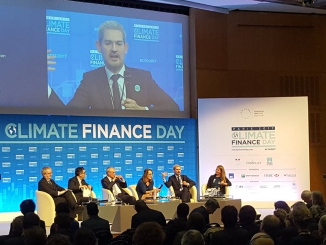 “It is very important that our banks, under the pilot phase, will be delivering a comprehensive dataset demonstrating that there is a de-risking factor in Energy Efficient Mortgages.”

Dombrovskis said the two other threads on which the Commission’s action plan will focus are proposals to integrate sustainability into investment mandates – the subject of a public consultation launched by the Commission in November – and establishing a common language and classification for what qualifies as being green and sustainable for investors.

“What we need to do is to incentivise green finance across the entire investment chain, and change the mind-set of those who manage our money,” he added. “And we see that this is already happening, so that is good news.

“The European Commission is fully committed to this goal, because we believe we need to work together, at EU-level, but also at national and local level, to deliver the low carbon transition.”

The Commission will hold a high level conference on 22 March focussing on the role financial services can play in the transition to a sustainable economy.

Garanti Bank is placing a TL305m (Eu75m) covered bond with the European Bank for Reconstruction & Development (EBRD), the Turkish bank announced today (Thursday), with a commitment to use the proceeds to lend green mortgages, in a follow-up to a similar bond placed with the IFC.