Caffil took advantage of an existing social bond framework to be the first-mover in Covid-19-related covered bonds on Tuesday, tapping into improving conditions to raise €1bn for lending to public hospitals ahead of an anticipated broader rise in French public spending and SFIL group funding.

In February of last year, Caisse Française de Financement Local (Caffil), the covered bond issuer of the SFIL group, launched the first French covered bond in either green or social format, a €1bn eight year deal with proceeds earmarked for refinancing loans to public hospitals, which remains the only social covered bond dedicated to healthcare.

After the onset of the coronavirus pandemic in Europe, the publicly-owned group soon began considering how it could issue a Covid-19-related bond, given that a large share of its lending to hospitals this year is expected to be directly related to the crisis.

“From the beginning of the crisis, we considered whether it would be best to use the tool we already had on the table for the SFIL group, namely the social bond framework, or to put in place a specific new framework,” Ralf Berninger, SFIL head of investor relations, told Sustainabonds. “We decided to stick to the current framework because the French public hospitals are key players in the fight against the crisis.”

He noted that the framework and new bond remain fully compliant with best market practice as enshrined in the Social Bond Principles, whose secretariat has published guidance confirming how Covid-19-related social bonds can be used in supporting crisis measures.

After putting together a proposal for such a transaction in mid-March, the issuer then waited for market conditions to improve, according to Sami Gotrane, managing director, head of treasury and financial markets at SFIL (pictured). The most recent French euro benchmark covered bonds have been priced some 30bp wider than before the full impact of the pandemic was felt in financial markets. 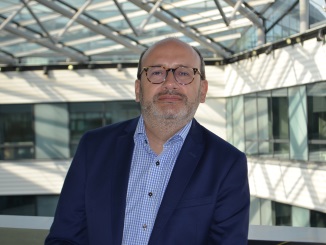 “We saw a very strong widening in the market and did not want to issue at a spread inconsistent with the levels we achieved last year,” said Gotrane. “If we raise funding at an elevated spread, this is passed on when we lend the money to the hospitals, so it was important for us to bear this in mind and fine the right timing.”

Following the encouraging execution on Monday of last week (27 April) of a €1.25bn seven year deal for compatriot Caisse de Refinancement de l’Habitat (CRH), which achieved the tightest pricing (31bp over mid-swaps) and longest maturity of any euro benchmark for over a month, Caffil launched its €1bn five year social bond on Tuesday via Barclays, BNP Paribas, ING, NatWest and SG.

A book of some €4.5bn allowed pricing to be tightened from initial guidance of the 28bp over mid-swaps area to a re-offer of 22bp, the biggest move since the crisis hit financial markets in early March. The pricing was also the tightest on a euro benchmark covered bond and first at a negative yield since 6 March.

“We are very pleased with the outcome,” said Olivier Eudes, head of dealing room at SFIL, “as all the figures around the transaction are very strong, in terms of investor demand, oversubscription, tightening during execution, final price, and the translation in terms of new issue premium, which is very limited compared to recent covered bonds.”

The deal is the issuer’s shortest-dated benchmark since 2015, but in line with the short to medium term maturities that have dominated supply during the crisis.

“Even if recent transactions showed the possibility of extending the maturity up to seven years, five year remains the deepest part of the curve,” said Eudes. “Having sufficient ALM flexibility, we decided to launch a new 2025 in order to get the most successful transaction.”

The book of around €4.5bn for the social bond is on a par with the biggest achieved this year for a single-tranche euro benchmark.

“We are happy to see that the franchise of Caffil in the market and the unique ESG profile we offer with this social framework dedicated to French public hospitals gives us the capacity to put liquidity on the table to participate in fighting this crisis,” said Eudes.

Jacob Gilbert, FI syndicate at NatWest Markets, said the level of demand reflected both investors’ expectations that covered bond spreads are heading in the direction, and the additional interest generated by the offering’s “robust” social component.

“If you look at the way it was delivered to the market, with a negative yield, you’d expect it to be dominated by bank treasuries,” he said, “but here we had a good level of diversification – obviously the usual bank treasury buyers, but also a significant level of asset management interest. That is really down to the work the SFIL group has done on the ESG side in getting their framework in place and the appeal that has for investors, particularly with that link to Covid-19.”

The French government is expected to announce an investment programme for French public hospitals after the summer and although SFIL does not yet know the extent of the role it will play in meeting the increased needs of the sector, as well as of local authorities, its funding programme is likely to grow, according to Gotrane.

“We expect to see an increase in our needs if we are involved in the various government plans,” he said, “and based on the outlook for local authorities’ needs, given that we have a high market share in this sector. However, it should be possible to increase our issuance quite significantly while maintaining decent funding levels.”

As well as covered bond issuance via Caffil, the group can raise funding under its social bond framework via issuance from parent SFIL in the SSA sector. Gotrane, however, noted that spreads in the covered bond market are more attractive from an issuer’s perspective than in the SSA space for many European issuers.

Energy efficient mortgages being advanced by the EMF-ECBC can be a key element in boosting green covered bonds and helping the EU meet energy targets, according to an industry survey and participants at a stakeholder meeting today (Thursday), where a Commission official welcomed the initiative.

Rabobank has launched a EUR5bn “ESG Leader” commercial paper and certificates of deposit programme that it can only issue off as long as it is ranked in the top 5% of companies by Sustainalytics, and an official at the Dutch issuer told Sustainabonds that the first sale already offered it a cost saving.