Asset growth, EU sustainable finance initiatives and pricing benefits could all help green bond supply rise to meet the growing demands of investors, according to speakers at an LBBW conference on 1 March, where a broadening of issuance, particularly into social bonds, was called for.

Discussing why growth in green bond issuance slowed sharply in 2018, Jürgen Köstner, head of investor relations at KfW, told delegates at the 13th LBBW European Covered Bond Forum in Mainz that the German development bank – which is the biggest green bond issuer in Germany – issued only EUR1.6bn last year – down from between EUR2bn-EUR4bn annually previously – because of a decrease in investments in renewable energy projects in Germany, which constitute the bulk of the eligible assets under its green bond framework. This was in spite of 40% of KfW’s EUR75bn of new lending, i.e. EUR30bn, being directed towards climate and environmental protection.

“The framework for renewable energy projects in Germany changed, meaning it was less attractive to invest in them, so in the end we could issue fewer green bonds,” said Köstner. “And that’s probably one of the major factors that hinders the market: you have to have more green projects.

The importance of growing the asset side of issuers’ balance sheets to boost green bond issuance was highlighted by Anders Hult, head of funding at SBAB, which is Sweden’s fifth largest mortgage lender and in January updated its green bond framework to allow for issuance by subsidiary Swedish Covered Bond Corporation (SCBC). The bank had previously issued green bonds backed by green loans to corporates, but in mid-2018 it launched an energy efficient mortgage for retail clients.

“Since 75% of our portfolio is towards the retail side, for us to do any larger volumes in the long run we needed to address the retail part of the portfolio,” said Hult.

The bank not only offered the discounted mortgage to new customers with energy efficient properties, but contacted existing customers where appropriate, helped by the Swedish authorities beginning to open up the Energy Performance Certificate (EPC) database. Borrowers with an EPC of A or B are granted a 10bp discount, and those with C a 5bp discount.

“We are really seeing that institutional investors, in particular pension funds in the Netherlands, are starting to move to make dedicated allocations to green bonds, so it is a very interesting market to be active in,” he said.

“We need to make this market look as much as possible like a normal bond market,” added Bos, “because that makes it easier for mainstream investors to enter the green bond market.”

He welcomed a EUR1bn deal for Telefónica in January that was the first green bond from the telecoms sector and plans from sovereigns including Sweden, the Netherlands, Hong Kong and Spain to enter the market.

Florian Sommer, head of sustainability research at Union Investment, also welcomed greater diversify in the market, but stressed that as well as the quantity of green bonds on offer, their quality is a key issue.

“We like to see quality green benefits as defined by the Green Bond Principles,” he said, “but as the market has grown a lot and we’ve got lots of different green bonds out there, it is increasingly difficult for investors to answer the question, how green is this green bond? There are different shades of green – dark green, light green, and then actually also some brown bonds dressed as green.

“And so ideally what we would like to see is an independent rating that gives us a clear signal of how green is a green bond. There are some initiatives, but a rating covering the entire market doesn’t really exist yet.”

The EU Sustainable Finance Action Plan is one initiative that, with its green taxonomy, is aiming to provide such clarity for investors, alongside a planned EU Green Bond Standard. Sommer and Köstner both welcomed the initiative.

“A green taxonomy is quite helpful, so that everyone knows what is green when they are talking about green,” said Köstner at KfW, which is a member of the Technical Expert Group working on the Action Plan.

“But you should also be careful not to be too strict in defining what is green,” he warned. “And if the definition is too strict – if we only talk about dark, dark green – then I doubt that will stimulate the green bond market.”

SBAB’s Hult suggested that a pricing benefit for green bonds – often dubbed a “greenium” – would help issuers decide to enter the market. 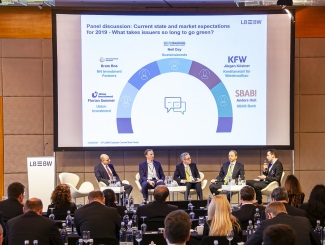 “It would be good for investors in general to show that they appreciate the effort that issuers put into this work,” he said, “and one obvious way of doing that is to maybe give up a basis point or so of spread for these types of bonds. That’s then an easy thing to take with you to internal discussions about these types of projects, and it would make it easier to do the investment that is required to go down the green route.”

Bos at NNIP left the door open to such a benefit, distinguishing between the primary and secondary markets. According to an analysis of some 2,500 data points by NNIP, the difference between green bonds and their issuers’ non-green curves was less than 1bp in the secondary market, he noted.

“So there is no difference in the secondary market,” said Bos. “And that’s also not really possible because in the end it is the same claim on a company as a normal bond.”

But he said that there can be a difference for new issues.

“In the primary market it’s a matter of demand and supply in the end, and in general we are currently seeing more demand for green bonds than regular bonds, so there is a little bit of discount there for issuers,” he said. “And you know, as an investor, I’m OK with that. There is so much new issuance in the market, there is so much to choose from, that overall there is a lot of new issue premium for investors to harvest.

“And in the end we also want this market to grow.”

He also expects green bonds to perform better over time.

“We are already seeing some proof – the market is young, but if you look over the last couple of years, most green bond portfolios have outperformed regular indices, so I think that’s a very good signal.”

NNIP also looks at the broader ESG performance of issuers, but it is not for now not getting involved in social bonds, with Bos remarking that the sector is still in its infancy and saying that clients see social goals as “less urgent” than climate action.

However, the arrival of social bonds was welcomed by Sommer at Union Investment, which is involved in ICMA’s work on the Social Bond Principles.

“Ultimately it’s about sustainable development, which clearly has a social dimension, and we see ourselves as sustainable investors,” he said. “There are a lot of social assets out there – if you think of health infrastructure, education infrastructure, and also expenditure financing social inclusion – which can be addressed and financed by social bonds.

“One criticism that we have of the EU taxonomy is that it is very much focusing on environmental themes,” added Sommer.

“Social themes should be captured if we are talking about a taxonomy for sustainable finance.”

Caffil chose to issue a social bond ahead of a green bond when it entered the sustainable bond market last month with the first French covered bond in either green or social format. Sami Gotrane, head of treasury and financial markets at Caffil parent SFIL, said the measurable impact of the project – to refinance loans to public hospitals – contributed to the success of the inaugural EUR1bn social bond attracting over EUR2.6bn of orders.

“Social is in our DNA because we are financing investments by the local public sector, which is why we decided to first price a transaction with loans to public hospitals,” he said. “But a while back we did discuss internally concerns whether investors would be interested in such a bond – green is, I would say, more sexy, no?

“But investors have been attracted by the fact that we could provide a clear measure of the impact of our financing on the quality of the health system in France, the ‘health value-added’. That partly explains the success of our bond and demonstrating a measurable impact is something that other issuers will probably have to ensure if they are to attract investors in the coming years.”

Landesbank Baden-Württemberg (LBBW) is establishing a social bond framework after having entered the green bond market with a senior unsecured bond in 2017 and followed that up with a green covered bond last year.

“Sustainability is one of the four strategic priorities at LBBW, so obviously green and social bonds is one of the key funding products we are offering,” said Thierry Nardon, head of treasury at LBBW. “This year we are planning to add a social bond programme with the first issuance in the course of the year.

“We are offering financing for green buildings in Europe, especially Germany and the UK, and the US, and we will use the proceeds of our social bond to fund schools and hospitals.”

La Banque Postale inaugurated a green, social and sustainability bond framework last week and attracted twice as many investors to the EUR750m 10 year green senior non-preferred bond than its last conventional SNP. Issuance in social and covered bond formats is set to follow.

Loans to local government bodies large and small are behind SFIL’s green bond issuance, and the French group anticipates complementing this with social lending, according to CEO Philippe Mills and colleagues.