Barclays became the first UK bank to issue a green bond yesterday (Monday), selling a EUR500m six year non-call five HoldCo issue flat to fair value in a strong credit market, shortly after the UK government established a green finance taskforce of which the issuer is a member.

Barclays’ deal is also the first green bond to 100% refinance assets in the UK.

The UK bank unveiled its green bond framework in September and in October the UK Department for Business, Energy & Industrial Strategy published a Clean Growth Strategy. This included setting up a taskforce whose remit includes the scaling-up of green mortgages, and the use of proceeds of Barclays’ issue are earmarked for refinancing residential mortgages on properties in England and Wales that are in the top 15% of the lowest carbon intensive buildings in the two countries. The properties were identified on the basis of Energy Performance Certificate (EPC) data released by the government earlier this year, and the offering has a second party opinion from the Carbon Trust and complies with the Green Bond Principles, as well as being certified under the low carbon buildings criteria of the Climate Bonds Standard.

“This issuance is an exciting step and complements Barclays’ existing involvement in the well-established green bond market,” said Tushar Morzaria, Barclays group finance director (pictured above). “It will help us diversify our investor base, attracting interest from the growing group of environmental, social and governance (ESG) investors.

“Today’s announcement also reflects the efforts of our Green Banking Council, which is committed to the development of innovative products and services that support our clients and customers in their transition towards a low carbon and sustainable future.”

Claire Perry MP, minister of state for climate change and industry (pictured below), said the launch of the deal was an exciting moment for the UK market. 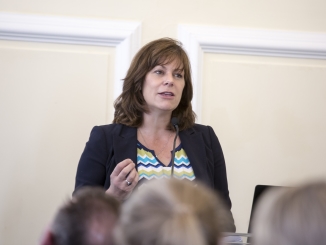 “The UK has demonstrated that tackling climate change and building a strong economy, can, and should, go hand in hand,” she said. “The transition to a clean, low carbon economy presents a multi-billion pound investment opportunity and we want UK businesses to take full advantage of it.

“The Government recognises the potential for the UK to cement its position as a global hub for investment in clean growth, and this is why we set up the Green Finance Taskforce with Barclays as a member.”

The Barclays plc deal, at the HoldCo level, contributes towards meeting the group’s TLAC requirements.

Leads ABN Amro, Barclays, Crédit Agricole and SEB went out with initial price thoughts of the 65p over mid-swaps area for the Baa2/BBB/A rated EUR500m no-grow deal, before moving to guidance of the 55bp area on the back of more than EUR1.8bn of orders. The deal was priced at 50bp over, with the book peaking at over EUR2.25bn and ultimately EUR1.85bn good at re-offer.

A banker close to the deal told Sustainabonds that the deal went in line with positive expectations.

“Everything a bit higher beta, like HoldCo issuance, has been rallying very strongly in the past few weeks,” he said, “so we knew for sure it would get a warm welcome. And the combination of the green angle and the EUR500m no-grow enabled the issuer and also investor to be quite flexible in terms of pricing.”

Another banker said that, at 50bp over, the six year non-call five deal came flat to fair value, based on Barclays HoldCo April 2022 bullets being bid at 40bp over, pre-announcement, and its December 2023 bullets at 57bp. However, he said that – with the market so strong and the Barclays name being attractive to investors, particularly with the limited size and supply – it was hard to disentangle to what extent the green angle may have had any pricing impact.

Distribution statistics showing how much had been sold to dedicated green accounts were not immediately available, but a banker said  the book was high quality and granular, and included dark green accounts as well as classic credit buyers.

The first UK bank to issue a bond in the broader environmental, social and governance (ESG) field was Lloyds bank, with a £250m deal in March 2015 to refinance loans to small and medium-sized businesses and agriculture and healthcare businesses with a high social and environmental impact, 96% of them in the UK’s most economically deprived areas.

Sean Kidney, CEO of the Climate Bonds Initiative, welcomed Barclays taking the lead in green bonds in the UK.

“The UK green bond market has been slow to develop, lagging many G20 and EU nations,” he said. “This new Barclays green bond should trigger more global banks and FTSE companies to act and initiate their own green bond programmes into 2018.”

HSBC meanwhile yesterday promised to provide US$100bn in sustainable financing and investment by 2025 alongside pledges to adopt the recommendations of the Taskforce on Climate-related Financial Disclosures (TCFD) and to be at the forefront of the debate about sustainable finance and investment, including promoting the development of industry-wide definitions and standards.

SpareBank 1 SMN inaugurated its green bond framework on 4 September with a EUR500m seven year senior preferred issue soon after it received an improved ESG rating from Sustainalytics, with its fisheries-related element welcomed by the Marine Stewardship Council.

Banks assessing climate risks and opportunities in line with TCFD recommendations must look long term, make use of comprehensive scenario analyses, and adapt data collection, according to findings of a UN-convened pilot, which revealed positive impacts such as improved customer engagement.