Commerzbank attracted as much as EUR1.25bn of orders from over 100 investors to its first green bond yesterday (Tuesday), a EUR500m five year senior non-preferred benchmark with proceeds earmarked for renewable energy financing.

The German bank had announced its green bond programme two weeks earlier. Its framework initially encompasses solar and onshore and offshore wind energy projects in Germany and abroad, with the EUR503m of assigned assets avoiding an estimated 755k tonnes of CO2 per year.

“Commerzbank is as an institution very much committed to sustainability,” Franz-Josef Kaufmann, deputy head of capital management and funding and head of strategic markets and projects at Commerzbank, told Sustainabonds. “The bank has a significant portfolio of assets in our centre of competence energy, where we finance renewable assets, and in that portfolio we have a meaningful amount of loans that we felt would make a strong underlying for a first green bond.”

The framework has a second party opinion from Sustainalytics, which noted that it is “robust, credible and transparent”, and also aligned with the Green Bond Principles.

“Sustainalytics considers that the projects will contribute to greenhouse gas emissions reductions globally and towards the German energy transition,” it said.

The new issue was preceded by a roadshow last week focusing on green bond investors.

“In addition to our framework and the structure of the green bond, we have also had very interesting discussions with investors about Commerzbank’s sustainability strategy and how the green bond programme fits into this,” said Mirko Gerhold, head of DCM bonds solutions at Commerzbank.

The German bank is rated C/Prime by ISS-oekom.

“When we consider issuing a green bond, it needs to fit into the overall funding requirement of the bank,” said Kaufmann. “The overwhelming success of our inaugural preferred senior bond meant that it shipped in more funding than originally expected, and with that we covered the majority of our preferred funding needs.”

“We still required a bit of non-preferred funding, and that’s why we decided to use the non-preferred instrument as the format for this green bond.”

Fixed income markets had proven volatile in the two weeks leading up to the new issue yesterday, with Berlin Hyp, for example, holding off entering the market for a day after on Wednesday finishing a roadshow for a green Pfandbrief, ultimately launching its EUR500m seven year covered bond successfully on Friday.

“Obviously we had been following the market when we were on the road, and we saw that there had been a significant amount of volatility,” said Kaufmann (pictured). “The interesting aspect was that beside all the noise we had seen, credit spreads – in particular credit spreads around our name – had been fairly stable. And that gave us a bit of comfort that structurally the market should for credit be in decent shape. 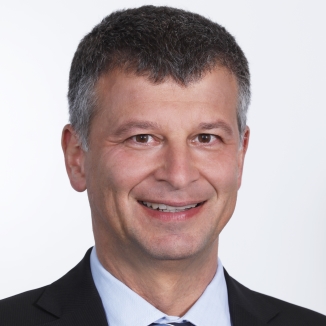 “We decided not to jump immediately on Monday into a market still digesting the volatility of the week before, but thought that the second day, i.e. Tuesday, could be a good day, and looking back I think it was the right choice. Capital markets and equity markets recovered, we saw numerous transactions announced throughout the day, and we got a very strong reception for our bond.”

Leads ABN AMRO, BBVA, Commerzbank, Crédit Agricole and ING went out with initial price thoughts (IPTs) of the 105bp-110bp over mid-swaps for the EUR500m no-grow five year senior non-preferred benchmark. Fair value was put at around 80bp over mid-swaps, with Commerzbank’s outstanding September 2023s bid at 78bp over mid-swaps and May 2024s at 93bp over.

“Nowadays, with all the volatility, you have to generate a bit of interest with the IPTs,” said a syndicate banker at one of the leads, “and we felt that a very fair new issue premium (NIP) would be around 15bp.

“To generate momentum we went out with the 105bp-110bp IPTs, having in mind to break through the 100bp level, and even 95bp. Looking at the book and dynamics, we could have achieved the latter, but the issuer decided to be fair and grant the 15bp NIP in recognition of the success of the roadshow and investors’ engagement.”

The deal was priced at 95bp over mid-swaps on the back of over EUR1.1bn of demand from more than 100 accounts, with demand having peaked around EUR1.25bn before the final pricing was set.

Funds were allocated 81% of the issue, central banks and official institutions 8%, banks 7%, insurance companies and pension funds 1%, and others 3%. While Germany took 13% of the bonds, 87% was placed internationally, with the Benelux taking 24%, France 21%, the Nordics 15%, the UK and Ireland 12%, southern Europe 10%, North America 3%, and Austria and Switzerland 2%.

“When arranging the roadshow, we very much targeted seeing green investors,” said Kaufmann, “and that’s how we chose the regions and investor meetings. Looking into the allocations, some 60% was to investors in so-called green centres, such as the Benelux, France and Scandinavia. It is hard to identify exactly which investors are green, but I would say that we had above EUR500m of greenish investors in the book – either green investors or other investors with green portfolios.

“Looking at the success of the trade,” he added, “I think we have chosen the right strategy and created a robust structure that has been accepted by the green investor community, which very much stresses green frameworks to get an idea how robust they are.”

Kaufmann declined to speculate on whether the green nature of the bond had influenced pricing.

“But looking into the book and seeing the support we got from green investors, that obviously helped us in the overall execution process in the primary market,” he added.

Having established and inaugurated its framework, Commerzbank expects to return to the green bond market in future.

“It was important that if we enter this market, we have the ambition to come back,” said Kaufmann. “The timing and how often very much depends on how we are able to identify assets that we could use, and I personally believe that we could build on the success of the trade to get some momentum in this respect.”

While Commerzbank could add other assets to the use of proceeds for future green bond issues, data on assets will be a key factor in determining just what can be used. The German bank is a major covered bond issuer, but like other institutions could face a challenge in identifying appropriate mortgage collateral should it wish to put together a green covered bond.

“An advantage for us as an institution in using this renewables portfolio was that we have all the respective data clearly ring-fenced in a dedicated business area, which made it feasible for us to get all the necessary information to analyse the portfolio, to provide to the second party opinion provider, and for the impact reporting,” said Kaufmann.

“If we look into our Pfandbrief cover pool, we are talking mainly about residential mortgages and a highly diversified and granular portfolio. Analysing such a portfolio to see if they could be eligible as green would require a clearly different dimension of effort to the renewables.”

Deutsche Hypo will next month become only the second issuer of a green benchmark covered bond, after having today (Wednesday) announced a roadshow ahead of a debut backed by commercial real estate, in a boost to the sustainable covered bond segment, which has lagged other asset classes.

Recent inaugural green senior non-preferred issues could represent the first green steps down the capital stack by financial institutions. Crédit Agricole CIB and our sister publication Bank+Insurance Hybrid Capital gathered together specialists in bank capital and green bonds to explore how green subordinated debt could work and help put the financial system on a path to sustainability.