Companies in the banking and broader finance sector foresee the demands of customers increasingly driving their sustainability measures in the future, according to oekom survey findings exclusively shared with Sustainabonds, with positive sustainability ratings of even more importance to such institutions than others.

Oekom research invited all 3,660 companies it rates to participate in its Impact Survey 2017 and 475 (13%) did so. 81 of the respondents (17%) are from the banking/finance sector. For 71 of these (15% of the total respondents) – those to which feedback can be directly attributed – oekom disclosed the breakdown to Sustainabonds. The institutions range from commercial, public and development banks to asset managers and exchanges.

When asked which factors have motivated their company to address the topic of sustainability, sustainability rating agencies (such as oekom) was the most-cited factor, selected by 69% of financials and an overall 61% of respondents. However, when asked which factors companies expect to become the most important drivers of sustainable development in the future, other factors came to the fore.

Demands from customers rose from second (on 58%) to first place, at 69%, as in the overall survey. The importance of legislative bodies/authorities is expected to remain steady, being cited by 56% of financials as a driving factor today compared with 55% as being expected to be one in the future.

Presenting the survey’s findings on Wednesday of last week (18 October), Jaspreet Duhra (pictured), head of oekom research’s London office, highlighted an expected rise in the importance of the capital markets in driving sustainability across the polled companies from all sectors, with the demands of banks and investors rising from 37% today to 46%, while shareholder demands rose from 35% to 47%. An increase in the importance of shareholders was more significant among financials, rising from 38% today to 49% in the future, although mainstream financial institutions featured less prominently, at 38% today and 39% going forward.

Joachim Fröhlich, member of the board of managing directors of Evangelische Bank – which co-sponsored the study – said that the findings offer pointers towards a more sustainable and fairer economy oriented towards the Principles for Responsible Investment (PRI) and the Sustainable Development Goals (SDGs)

“It shows that stakeholders have significant leverage over sustainable development and responsible corporate governance, provided they actively exercise this power,” he said.

Although companies with Prime status from oekom (with a good or excellent score) were disproportionately represented in the survey – constituting 35% of respondents relative to 16% of the rating universe for industrialised countries and 5% for non-industrialised countries – Duhra noted that the share of responses from Non-Prime companies had increased from a prior, first survey in 2013, to 65%, thereby offering a more realistic reflection of the rated universe.

In spite of the minority share of companies having good or excellent ratings, 89% of respondents said that having a positive sustainability rating is either fairly or very important for their company, a share that rose to 97% for financial companies.

“The impact of responsible investment has increased in the last few years,” said Robert Hassler, CEO of oekom research. “We are particularly proud of the fact that rating agencies, when compared to the first impact study from 2013, are considered even more relevant and have become an important driver for corporate sustainability activities.

“Sustainability ratings have a huge leverage effect. However, this high significance is coupled with considerable responsibility, which must be reflected in the use of a strong quality management system by agencies.”

Overall, 92% of respondents deemed the topic of sustainability to be either fairly or very important to their future corporate development, with a slightly higher share for financials, 94%. 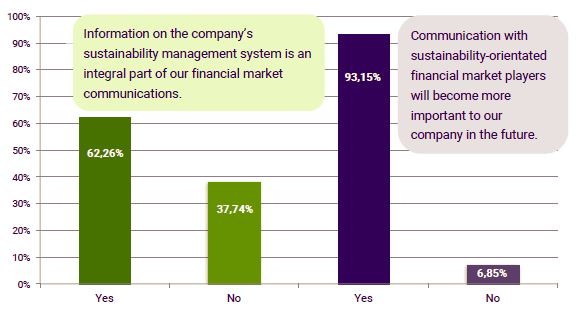 Note: figures are for all participants (not just financials); Source: oekom research

In a “compelling message” to its peers, Benin this month became the first African country to issue an SDG (Sustainable Development Goals) bond, a €500m transaction that was some three years in the making and which enabled the country to achieve a large greenium.

The green bond market could grow by as little as 13% this year, according to Moody’s, which has slashed its forecast after having previously anticipated a 60% rise in issuance. The rating agency nevertheless noted increases in sustainable and social bond issuance, and highlighted covered bonds’ potential.