DKB sold a four times subscribed €500m five year “blue” social Pfandbrief focused on water and waste water services on Wednesday, with the Eurosystem and SRI investors among those helping the German issuer achieve an “outstanding” deal, according to its head of funding and IR.

The mandate for Deutsche Kreditbank’s deal was announced on 21 October and after a roadshow the BayernLB subsidiary said on Monday (28 October) that it could launch the covered bond issue as early as Wednesday – the first day on which the Eurosystem could buy bonds for the ECB’s restarted asset purchase programme (APP).

On Wednesday morning, leads ABN AMRO, BayernLB, DZ, Natixis and UniCredit went out with initial guidance of the 7bp over mid-swaps area for the €500m no-grow 10 year public sector Pfandbrief, and after 25 minutes they reported books above €500m. After just over three-quarters of an hour, guidance was revised to the 5bp area on the back of books above €1bn, and the pricing was ultimately set at 3bp on the back of books above €1.4bn. Ultimately over €2bn of orders from 90 accounts were good at re-offer.

The book included an early order from the Eurosystem for 40% of the new issue – in line with the CBPP3 (third covered bond purchase programme) order for a BPCE SFH French covered bond issue also launched on Wednesday and towards the upper end of expectations. However, according to distribution statistics released on Thursday, central banks were allocated only 11% (€53m) of the new issue, with asset managers allocated 40%, banks 30%, official institutions 12%, and insurance companies 6%.

“This was one of DKB’s best ever transactions,” Uwe Jurkschat, head of funding and investor relations at DKB, told Sustainabonds. “The deal would have worked without APP and that is good news for the market.

“It would also have been possible to go even tighter, but we decided to stick to plus 3bp because we said during our roadshow that while this is of course a refinancing exercise for us, it is for the investors, too, and we are convinced 3bp is a good result for both sides.”

The outcome is in stark contrast to that of the last German covered bond benchmark to have hit the market, a Deutsche Pfandbriefbank (pbb) €500m six year mortgage Pfandbrief on 9 October that was priced in the middle of guidance and apparently not fully subscribed.

Jurkschat said that while it made sense to wait an extra day for the CBPP3 restart before entering the market, the issuer had originally considered this week a good one because blackout periods for many issuers would likely mean that there would be less competing supply.

“It would of course have been possible to come to the market on Tuesday,” he said, “but we could also use the extra day to have further discussions with investors and there was huge interest in our blue concept.”

DKB inaugurated its social bond framework with a €500m 10 year public sector covered bond in September 2018, making it the first German bank to have issued in green and social format, with it having issued green bonds since June 2016. The overall social framework includes a broad range of categories, including social housing, health and care, education and research, inclusion, and public supply, but the new issue was concentrated on water and waste water treatment.

“In our initial social bond issuance we wanted to show the broad universe of social infrastructure that we finance,” said Anna Stawowy, funding and investor relations, DKB (pictured). “And then we felt it would be a good idea to just focus on one category for a benchmark transaction within the framework. 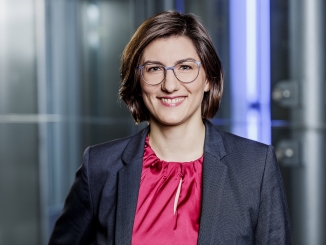 “This water and waste water bond highlights our business model and our understanding within DKB of the concept of sustainability, with its combination of ecological and social aspects. And the colour blue is very resonant – it’s not only the colour of DKB and water, but also of our planet. This message was well received by investors.”

Around one-third of the new issue was placed with ESG investors, according to DKB.

Green or social bonds dubbed “blue” have thus far been primarily issued out of the SSA sector and at times linked to ocean-related initiatives rather than water supply and treatment, while the social sector in general has been overshadowed by the burgeoning green bond market.

“It is proof of concept that it is possible to achieve a big book and a great success with this social topic if it is done the right way.”

Since the issuance of DKB’s debut social bond – the first social covered bond from Germany backed by public sector assets – its social asset pool has grown from around €1.5bn to €2.8bn, thanks to an increase in the public supply category, which grew from €424m to €1.724bn. This public supply category includes water supply and waste water (sewerage), with DKB’s clients including municipal water companies. Some €1.299bn of this lending, comprising 569 loans in Germany, is eligible for DKB’s public sector Pfandbrief cover pool.

“The fact that we increased the social bond pool with more than €1bn of water and waste water assets shows investors the extent to which such sustainable activities are at the heart of our business strategy,” said Armin Hermann, head of treasury at DKB. “We don’t have to go searching into every corner to find green or social assets; we have them in size.

“These water/waste water assets are based on municipality-driven business,” he added, “so we are able to issue a public sector Pfandbrief based on them. We like to be able to issue different formats out of the social bond framework.”

Stawowy noted that the long term lending to the sector also reflects the sustainable nature of the business. In Germany, water supply and sewerage services are provided by a diverse range of entities, with government and other publicly-owned enterprises, owner-operated municipal enterprises, water boards and land communities, and other associations among those DKB lends to.

As well as SDG 6 – clean water and sanitation, DKB cites SDGs 3, 9 and 11 (good health and well-being; industry, innovation and infrastructure; and sustainable cities and communities) as relevant to its blue social bond.

According to Hermann, the SDG mapping of the bank’s balance sheet is not only used for external communications related to capital markets activity, but internally.

“We have extended the framework across the whole balance sheet so that the sustainability concept gains traction and we can further develop our business model,” he said. “And these capital markets transactions also have a signalling function to give everyone in Germany and abroad more insight into what DKB is doing.”

To this end, earlier this year DKB raised some €7m through a retail social bond, a 10 year public sector Pfandbrief with a 0.7% coupon that was sold to a few hundred investors, around 90% of them existing DKB customers.

“We wanted to open up this type of instrument to our retail clients, where we are facing increasing demand for sustainable investments and such a fixed income product offers an alternative to savings,” said Stawowy.

“It is also quite a good product to show our retail clients the corporate business side of DKB. They might think of us as an online bank and not realise that we have a quite sustainable business model including sectors such as social infrastructure and renewable energy.”

Nykredit Realkredit issued the second and largest green Danish covered bond yet last week, a SEK4.1bn (EUR383m, DKK2.87bn) three year FRN that achieved a 3bp saving versus the issuer’s conventional issuance which will be passed on to its borrowers.

BBVA issued the largest green bond from a Eurozone bank today (Thursday), a EUR1bn seven year senior non-preferred deal that inaugurated a new SDG-aligned framework and attracted more than EUR2.5bn of demand despite coming relatively tight in a recovering market.

QBE issued the first capital instrument from a financial institution to take the form of a social bond on 9 November, a US$400m Additional Tier 1 gender equality bond that attracted some US$9.5bn of orders.