Caffil attracted over €3bn of demand to the first ever green public sector covered bond on Tuesday, a €750m 10 year issue that Philippe Mills, CEO of Caffil parent SFIL, said is “close to the heart” of its mission, with green bonds complementing its social issuance.

Caisse Française de Financement Local (Caffil), the covered bond issuer of public development bank SFIL, announced its planned debut on 14 October, then held a roadshow the following week. On Monday of last week (28 October) it said the deal could be expected in early November.

On Tuesday morning, Caffil’s issue then attracted more than €1bn of demand in around 20 minutes after leads Crédit Agricole, HSBC, structuring advisor Natixis, SG and UniCredit went out with initial guidance of the mid-swaps plus 7bp area for the €750m no-grow 10 year issue. The deal was ultimately priced 5bp tighter than the middle of initial guidance, at plus 2bp, on the back of the €3bn-plus book.

“This is the tightest French covered bond of the year,” said a syndicate banker at one of the leads, “so this is an outstanding success.”

With the restart of the ECB’s asset purchase programme on Friday, Eurosystem orders for 40% of new issues eligible for the third covered bond purchase programme (CBPP3) have boosted order books for the past week’s deals, but demand for Caffil’s new issue was also lifted by a large number of ESG investors, according to SFIL, with 17 of the 103 accounts new investors.

“This inaugural green bond is close to the heart of our public policy mission,” said Philippe Mills, CEO of SFIL and chairman of the supervisory board of Caffil (pictured). “It is part of the many sustainable development initiatives we have taken in recent years: we joined the UN Global Compact last year, we recently established our carbon footprint and published our social and environmental strategy, as well as our first CSR report this year. 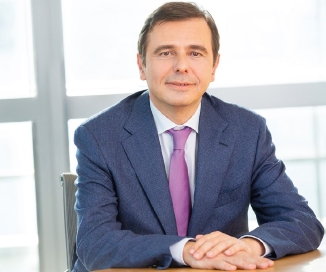 “Our objective is to cover all the key areas of local green public investments,” said Sami Gotrane, managing director, treasury and financial markets. “For this first transaction, we expect a significant share of financing to go to clean local public transportation projects.

“Sustainable water management will be another key area for our green lending activity.”

“Green and social bond issuance will be very much complementary for us,” Mills told Sustainabonds. “We plan to come to the market with at least one green or social benchmark per year.

“We expect our volume of green lending to increase significantly over the coming years as local authorities become more familiar with the product.”

Société Générale sold the first green French covered bond, a €1bn 10 year in July, although whereas that was backed by residential mortgages, Caffil’s issuance is public sector-backed, and it will be the first such green covered bond.

“It is clearly innovative as the first public sector covered bond transaction of this kind,” said Gotrane. “But we have also looked closely at established best market practices and we will closely stick to these, for example with respect to reporting.”

The European Commission will in May propose a sustainable finance taxonomy that will provide the basis for EU labels for green bonds to be introduced in 2019, it announced today (Thursday), among measures including changes to fiduciary duty and an exploration of a “green supporting factor”.