ECB officials called for greater disclosure of all covered bonds’ climate-related risks at a European Covered Bond Council plenary last week, while speakers were sympathetic towards a flexible definition of green covered bonds as the EBA asked the industry whether it feels the asset class requires a dedicated framework.

The ECBC meeting in Vienna was held the day after the ECB on Tuesday of last week (19 September) released details of how it plans to decarbonise its corporate bond holdings, by tilting reinvestments under the Corporate Sector Purchase Programme (CSPP) and Pandemic Emergency Purchase Programme (PEPP) towards issuers with a better performance vis-à-vis climate goals. The central bank will base this on issuer-specific climate scores factoring in past emissions, greenhouse gas targets, and climate disclosures (see chart at end of article).

The details deliver one part of plans to incorporate climate change considerations into the ECB’s monetary policy operations that it announced in July. Then, the ECB also said that in future it will also consider climate change risks in its collateral framework and require compliance with the Corporate Sustainability Reporting Directive (CSRD) where possible.

“A significant proportion of the assets that can be pledged as collateral in Eurosystem credit operations, such as asset-backed securities and covered bonds, do not fall under the CSRD,” it added. “To ensure a proper assessment of climate-related financial risks for those assets as well, the Eurosystem supports better and harmonised disclosures of climate-related data for them and, acting as a catalyst, engages closely with the relevant authorities to make this happen.”

Speaking on a regulatory panel at the plenary, Ad Visser, head of financial markets and collateral section, market operations analysis division, at the ECB, echoed comments from deputy director general – general market operations Torsti Silvonen at an ECBC dinner the previous evening in reiterating this stance, noting that it has 15 to 20 times more collateral in the form of covered bonds and ABS than corporate bonds.

“At the ECB, we find it important that we can also take measures and get a better insight into the climate change features of covered bonds,” said Visser, “and also ABS, two important categories of collateral that are being mobilised.

“We think it’s good to continue playing this kind of catalyst role,” he added, “which we can play both in our collateral framework and in our programmes. And we very much want to encourage the industry and also the authorities to work more on getting climate related disclosure organised.”

Morten Bækmand Nielsen, ECBC chair and Nykredit head of ALM and investor relations, acknowledged the ECB’s call – “We hear you loud and clear,” he said – and noted that in the just-approved 2023 version of the Covered Bond Label harmonised transparency template (HTT) the F1 tab for green data remains.

“So far, provision of that data is voluntary for the issuers,” said Nielsen. “But I would like to take this opportunity to call on all issuers to actually populate that data in your HTTs.

“It’s part of a very important agenda across the EU, the green transition, the energy situation. This is a place where we can contribute by providing good data for the stakeholders and making sure that everybody can see what it is you are financing.”

While welcoming Nielsen “encouraging” issuers thus and the ECBC’s overall work in providing transparency through the HTT and Label, Visser noted that only around 10% to 14% of issuers had filled in such optional data.

“The word ‘mandatory’, that could be even better,” he added. “It’s very important that these figures go up, and in any case, that they start collecting also these data sooner rather than later.”

The ECB sees three points as particularly important in respect of climate-related disclosure for covered bonds: that it is necessary for all covered bonds, not just green/sustainable covered bonds, in order to be able to identify their climate-related risks; that data collection at the time of origination is crucial and should start without delay for all new loans; and that harmonised and consistent reporting across asset classes and jurisdictions is key.

Visser acknowledged challenges with respect to data that issuers face and the burden of the various incoming sustainability regulations, also saying that he hopes he will not be “bashed” as he had sometimes previously been in respect of the ECB’s covered bond purchase programmes.

“Perhaps one topic is over, and a new one starts.”

The plenary also addressed how green covered bonds might be defined, with the question still open seven years after Berlin Hyp issued the first of its kind in 2015.

The European Banking Authority (EBA) touched on the issue in a report on sustainable securitisation published in March in relation to the EU Green Bond Standard (GBS) and other initiatives, with Roberta de Filippis, policy expert in EBA’s prudential regulation and supervisory policy department, noting that this was partly because of its relevance to covered bond structures using SPVs.

“As to my knowledge – and I also checked with my Commission colleagues – there was no reach-out of the covered bond community for what concerns green covered bonds,” she said, “and whether there are issues for green covered bonds of being part of this new EU Green Bond Standard, which is voluntary, but, of course, which can be perceived by the market as a gold standard for green bonds.

“So I would encourage the covered bond community to reach out in case you see some issues for covered bonds to be in the scope of this EU GBS, or in case you think that there is scope for having a dedicated framework for it.”

ECBC secretary general Luca Bertalot noted that a recently formed ESG taskforce, moderated by UK Regulated Covered Bond Council executive director Ian Stewart, had officially received its mandate the previous day. The industry body is also meeting with authorities including the ECB, the European Commission and IMF next week in Venice, where green covered bonds and other liabilities, as well as the Energy Efficient Mortgages Initiative (EEMI) will be discussed.

“The work that the authorities are doing, especially on sustainability, is extremely important,” said Bertalot. “They are designing the standards for the new world, the green world. So being part of this discussion for us is essential. And we believe that we are special, so we want to make it the right angle for covered bonds to be part of this story.

“We invite all the members to contact Ian and make sure your voice is heard,” he added, “because we know that you have different views. What does it mean, green covered bonds? It’s an open debate.”

In the majority of green and sustainable covered bonds, assets eligible as use of proceeds under their frameworks have been within cover pools, but a few have merely used covered bonds as a vehicle for their green or sustainable bonds with eligible assets being outside the cover pool. The latter have been the subject of criticism from some “purists”, although the Green Bond Principles and EBA have shown sympathy with the more flexible approach.

Noting that sustainable issuance has fallen as a share of overall euro benchmark issuance from around 14% in 2021 to 10% in 2022, despite it growing in other bank funding, ING head of financials sector strategy Maureen Schuller said that issuers striving to restrict eligible assets to those in cover pools means the range of potential assets is “slim”. And Stefano Patruno, head of European regulatory policies, Intesa Sanpaolo, and ECBC deputy chair, said that policymakers’ allowance for the more flexible approach thus far is “wise” for at least a transitional period, given a lack of assets.

“The important thing,” said Carmen Muñoz, head of resource development at Sustainable Fitch, “is that if you have a green bond framework, it spells out how you’re going to be using your proceeds, so you have a clear picture of where those funds are going and external parties can actually evaluate whether that is additive or not.”

“It’s one thing to set minimum rules for what is green and what’s not – that’s very important,” he said. “But on top of that, if we come into the office tomorrow and there are 10 different green bonds being issued, how do we go about picking the right one? For us, the right one is the one with the biggest ambition and the one that serves best to establish this energy transition.” 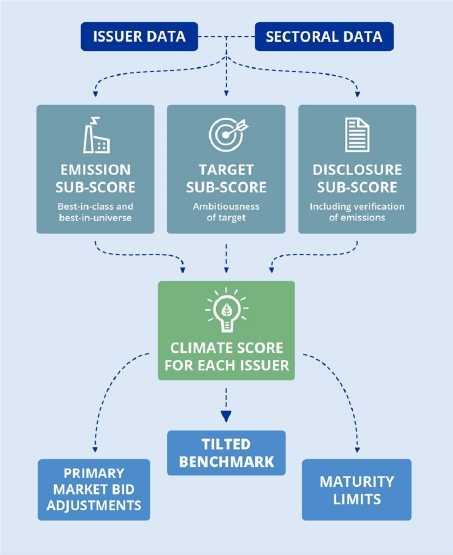 Photo: Nielsen, de Filippis and Visser with HSBC’s Frank Will on the ECBC plenary’s regulatory panel

The European Commission is “looking positively” at reducing capital charges to boost green loans such as energy efficient mortgages, Valdis Dombrovskis said today (Tuesday). A draft definition for such loans is due in February ahead of an EeMAP pilot phase that could support such a move.

MünchenerHyp to add green bonds as greenies play down costs

Sustainable covered bond pioneer MünchenerHyp is working on a distinct green bond framework to accompany its prior social framework, in a move driven by investor preferences. Proponents have meanwhile denied a claim green bonds are a “lose-lose”, pointing to new issuer-investor benefits.