PKO BH then yesterday launched its inaugural issue, a PLN250m five year floating rate note that was increased from an initial PLN200m, with pricing of 60bp over three month Wibor being in the middle of guidance of the 60bp area.

Some 41% was placed with international investors, with domestic accounts. Fund managers were allocated 54%, banks 22%, official institutions 20%, and insurance companies and pension funds 4%.

“PKO Bank Hipoteczny is the largest issuer of mortgage covered bonds in Poland and the obvious leader on the market,” said Paulina Strugała, CEO of PKO BH (pictured). “All of this encourages us to introduce innovative financial products and set new standards on the Polish market. 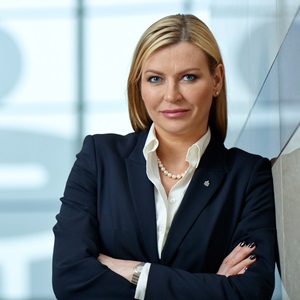 “The best example is our green covered bond framework and the criteria for green residential properties in Poland, developed on the basis of the highest international standards. With the issue of green covered bonds, sustainable development becomes an integral part of our business.”

PKO worked with real estate consultant Drees & Sommer on its methodology, whereby new or existing residential properties must be among the top 15% low carbon buildings in Poland, or have undergone an upgrade resulting in a reduction of carbon emissions or energy consumption of at least 30%.

PKO BH announced its framework after having in April joined the pilot scheme of the Energy Efficient Mortgages Initiative.

“We would like to have the opportunity to be at the forefront of the standards that are being set within Europe and also of how we can incorporate these into our Polish market, where the green concept is quite new, to be honest,” Agnieszka Zdziennicka, head of treasury and investor relations in PKO BH, told Sustainabonds. “We would like to first of all help our customers to lower CO2 emissions, but also to improve and enhance their ability to service their loans – that’s very important for us.”

The green bond framework has a second party opinion (SPO) from Sustainalytics, confirming its compliance with the Green Bond Principles.

2018 is proving a banner year for green bonds in Hong Kong, with the launch of certification and subsidy initiatives, and a planned green bond programme by the government. Ahead of co-hosting with ICMA the 2018 G&SBP AGM and conference, Enoch Fung, Head of the Market Development Division of the HKMA, spoke to Sustainabonds about Hong Kong’s green bond hopes.