Münchener Hypothekenbank can now issue green commercial paper, after having added the option to its EUR5bn programme, with the short term debt earmarked to refinance green assets that have not yet been included in its cover pool or the parts of loans that are cover pool-ineligible.

The Bavarian lender issued the first ever ESG covered bond in September 2014 and its green CP comes after it in October 2018 debuted a Ecological ESG Pfandbrief.

The use of proceeds for the green CP is the same as for the latter’s green bond framework, namely green residential and commercial mortgages. However, it will finance loans that MünchenerHyp has made but which are not yet in its Pfandbrief cover pool, or the parts of mortgages that are above the 60% loan-to-value limit of Pfandbrief-eligible collateral.

“There is a certain time lag between the payment of the loan and the entry of the Pfandbrief-eligible part of the loan into the cover pool,” said Claudia Bärdges-Koch, head of debt investor relations and client acquisition at MünchenerHyp (pictured). “Every loan with a high LTV ratio is only cover pool-eligible up to 60%, but the overall sustainable engagement of the bank is bigger.” 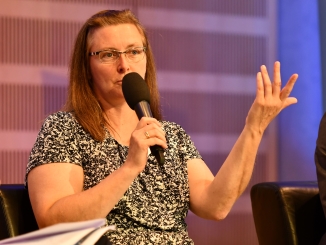 She told Sustainabonds that the idea for green CP came about at the start of the year but was then implemented as MünchenerHyp was updating its CP programme in May, when the issuer had to check that its proposed inclusion of the green use of proceeds would be possible under the STEP (Short-term European Paper) initiative. MünchenerHyp also had to get a fresh SPO from ISS-oekom for the extended green bond framework.

MünchenerHyp’s programme is already generating interest among investors, particularly dedicated sustainable funds including some who have got to know the issuer through its ESG Pfandbriefe, according to Bärdges-Koch, who said the bank could issue its first green CP soon.

“Some Dutch sustainable investors, for example, have been really interested because they regularly have bits and pieces to invest short term and so far have had no idea where to invest it,” she said.

In spite of the growth of green bonds, short term sustainable debt programmes remain a rarity. When Rabobank, for example, established an “ESG Leader” CP programme a year ago, it referenced not a pool of assets, but the issuer’s sustainability standing, with the Dutch bank saying that replicating the techniques of a green bond framework – i.e. the earmarking of proceeds to financing longer term assets, and reporting on them in a timely manner – were not viable for such short term debt.

However, MünchenerHyp will provide quarterly reporting on its green CP – starting at the end of the third quarter – that will allow investors to see the use of proceeds, while they will be able to derive the impact of their investment from annual impact reporting for the green bond framework.

“We are broadening the field of sustainable refinancing with the implementation of green CP,” said Rafael Scholz, head of treasury at MünchenerHyp. “In the current market more or less all green refinancing products are focusing on the medium to long term capital markets.

Lower capital requirements for green assets could be credit negative for banks, according to Moody’s, because they could lead to “real risks” being underestimated, but the EMF-ECBC’s Luca Bertalot argues that the industry could satisfy an evidence-based European Commission approach.

Eika Boligkreditt sold its first green bond on Tuesday, with the green element and a defensive approach contributing to a successful outcome in an uncertain market, according to an official at the Norwegian issuer, whose framework tackles taxonomy alignment and reflects green progress in the Eika Alliance.