The Royal Bank of Scotland Group issued the first bond from a UK financial institution aligned with the Social Bond Principles on 8 November, a €750m six year non-call five social bond with proceeds earmarked for SME lending in deprived parts of the UK.

The transaction is the first off a broader green, social and sustainability bond framework the issuer published in July, and Scott Forrest, Head of Treasury DCM at RBS, said the bank was keen to push forward the social bond agenda with its inaugural trade.

“We are acutely aware of the development in green bonds being issued by both corporates and financial institutions,” he said, “but we felt that there would be interest in a social bond issuance.

“It was also a very good way in which we could help align our overall leading position in the SME lending sector with our ambitions on the sustainability agenda,” he added. “We wanted to find a way in which we could look to redress some of the geographical inequalities that we see within the UK.”

RBS has a leading position in lending to the UK SME sector, with close to 170,000 loans in a £26.4bn portfolio as of Q1. Asset selection for the social bond involves filtering these down using criteria such as seasoning, performance and sector to some £8.6bn, and these are then ranked into deciles according to Office of National Statistics (ONS) measures of regional economic standing (Gross Value Added per capita and Unemployment Claimant rates) and the bottom 30%, around £2.5bn, constituting the asset pool reflect lending to deprived areas.

“We were keen to try to develop a methodology and approach that would, firstly, be viewed favorably by investors, and secondly, be capable of being replicated by other issuers, and we wanted everything we did to be perceived as best practice,” said Forrest. “The quantification metrics we use and report on are therefore not bespoke RBS internal information, but from publicly available reports released by the government on a consistent basis.

“We therefore use Office of National Statistics data to define our lending to deprived areas and use that in our impact reporting. As it’s a government formula and statistic, it’s a demonstrable methodology that other issuers can use and which investors can monitor. From that perspective, it’s a very neat way to try to solve something that could be quite complex.”

RBS announced its plans for the social bond on Monday, 4 November then held a two-day roadshow from the following day. Forrest said the reception from investors was overwhelmingly positive.

“From their perspective, it offers some diversification benefit, particularly away from green bonds, and a number of investors were keen to see more product come to market in this particular sub-sector of ESG.

Despite marketing the social bond against the backdrop of Brexit and the UK general election, RBS received very few questions on the topics, according to Forrest (pictured below). 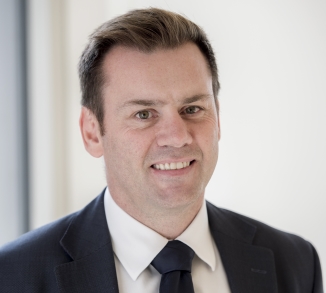 “Interestingly, one account did say they had been off risk for UK bank names but that, in light of the social angle, they would use this as an opportunity to try to reverse that stance,” he added. “We did see that name in the order book, but given the size of the book we were able to move pricing to a level they weren’t comfortable with, so they ultimately passed. It was nevertheless great to see that we had at least one account for whom the positive aspect of the product was sufficient to overcome the hurdle of Brexit from an internal credit risk perspective.”

Upon announcing its plans, RBS retained the option of issuing in sterling and/or euros, but ultimately only issued in the latter currency.

“Ultimately we would like to have more sterling on our balance sheet and we wanted the opportunity to engage with investors to test the appetite for sterling,” he said, “but we were acutely aware that the ESG product is predominantly euro-denominated.

On the Friday (8 November) after the social bond was teed up, leads ABN AMRO, Crédit Agricole CIB, ING, NatWest and Nomura went out with initial price thoughts of the mid-swaps plus 120bp area for the HoldCo six year non-call five euro benchmark transaction. Books were above €1.25bn after around two hours and guidance was set at 105bp+/-5bp, will price in range, after around four hours, with books at around €2bn. The deal was ultimately priced at mid-swaps plus 100bp and the size at €750m (£641m) on the back of more than €2bn of orders.

Forrest said the pricing for the inaugural social bond was equivalent to flat to through RBS secondaries.

“So it had a positive impact from a financial perspective,” he said, “which was very pleasing to see.”

“Just a couple of days earlier, we saw another UK name enjoy a strong reception, but they paid a new issue premium of 7bp-10bp, and RBS’s outcome is quite rare in a market where even core European issuers are being pushed to pay anything between 5bp and 10bp,” he said. “The social element certainly helped, as did having a limited size.”

According to Kalbin, the new issue encountered “robust” demand from SRI investors. Fund managers were allocated 71%, banks and private banks 14%, insurance companies and pension funds 9%, central banks 5%, and others 1%. The UK took 27%, France 27%, Germany, Austria and Switzerland 16%, southern Europe 14%, the Nordics 7%, Netherlands and Luxembourg 6%, and others 3%.

“There was strong demand for this bond, with institutional investors increasingly targeting socially useful lending and opportunities to track and measure the impact of their investments,” said RBS chief executive Alison Rose. “This is an important milestone for RBS as we build a more sustainable, purpose-led bank that champions the communities we serve and helps them to thrive.”

According to Forrest, RBS’s green, social and sustainability bond framework affords the issuer the flexibility of supporting a variety of sectors going forward.

“Back in 2018 we announced targets in relation to £10bn of lending to renewable energy and clean transportation by the end of 2020, so we have assets that we would consider from the green side,” he said. “We have further capacity for a similar type of transaction to the debut, but within the Social Bond Principles there are other areas there we feel we could continue to help service and support as well as lending to SMEs, such as education, healthcare and affordable housing.

“We are hugely pleased that we have been able to bring something to market that is hopefully moving the debate in relation to social bonds,” he added, “and it would be great to see others follow in a similar pattern in the future.”

“It’s a nascent market,” said Forrest, “but one that we are keen to help support to really promote this asset class as much as possible.”

Banks assessing climate risks and opportunities in line with TCFD recommendations must look long term, make use of comprehensive scenario analyses, and adapt data collection, according to findings of a UN-convened pilot, which revealed positive impacts such as improved customer engagement.

SBAB’s Swedish Covered Bond Corporation issued the largest Swedish krona green bond on Wednesday, a SEK6bn (EUR585m) covered bond backed by energy-efficient mortgages – the first in Sweden – that attracted over SEK14bn of orders and was priced inside SCBC’s secondary curve.

Green covered bond issuance looks set for significant growth thanks to regulatory measures, increasing investor interest and banks’ efforts to improve the identification of green assets and determination to finance such assets, according to S&P, with initiatives such as EeMAP deemed supportive.