On 16 November 2019, Saint-Étienne inaugurated its third tramline, building on a mode of transport for Stephanois that is sustainable in more ways than one: the city is the only one in France to have continuously used trams since the 19th century. Christian Julien, vice president in charge of the budget of the metropolis of Saint-Étienne, characterises the fully electric tramway as an energy efficient and gentle mode of transport that allows for better air quality while preserving the quality of life.

Some €10m of the financing of the new line was in the form of a green loan originated by La Banque Postale and to be refinanced by the SFIL group.

“Vis-à-vis the user and the taxpayer, financing an environment-friendly project using a green loan allows us to display overall consistency,” says Julien.

Saint-Étienne’s loan is one of the loans to be refinanced under a new SFIL green bond framework that was itself inaugurated the week ahead of the tramline, when Caisse Française de Financement Local (Caffil) on 5 November issued the first ever green covered bond backed by public sector assets.

The covered bond-issuing subsidiary of the SFIL group attracted over €3bn of orders to the 10 year obligations foncières, allowing for pricing some 5bp inside initial guidance, at 2bp over mid-swaps, as interest from ESG investors new to the product boosted demand in conjunction with the revived third covered bond purchase programme of the European Central Bank. 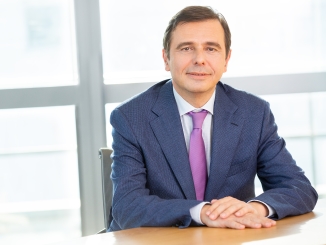 “This inaugural green bond is close to the heart of our public policy mission,” says Philippe Mills, CEO of SFIL and chairman of the supervisory board of Caffil (pictured). “It is part of the many sustainable development initiatives we have taken in recent years: we joined the UN Global Compact in 2018, we recently established our carbon footprint and published our social and environmental strategy, as well as our first CSR report in 2019.

“Our objective is to cover all the key areas of local green public investments,” says Sami Gotrane, managing director, treasury and financial markets. “For this first transaction, we expect a significant share of financing to go to clean local public transportation projects. Sustainable water management will be another key area for our green lending activity.”

Contributing to the national effort

According to second party opinion provider Sustainalytics, the group’s issuance of green bonds is an important contribution to French national sustainability efforts, given the role local government plays in facilitating social and environmental sustainability and SFIL’s position as a leading financial provider.

“As such, Sustainalytics is of the opinion that SFIL Group is well-positioned to issue green financial instruments that will facilitate improved social infrastructure and environmental protection,” it said, “thus contributing to the transition to a low carbon economy.”

The green bond debut comes nine months after Caffil launched the first social bond from the SFIL group, a €1bn eight year transaction in February that was the first green or social covered bond from France.

“We had an order-book above €2.6bn after only two hours, with over 110 investors participating in the transaction,” says Gotrane. “We did an extensive European roadshow and we are particularly pleased to see that more than one-third of the transaction was allocated to investors with a strong commitment to sustainable investment.

“We are lending on average close to €500m per year to French public hospitals. This transaction provides an opportunity for investors to participate in the financing of social projects in France.”

French public hospitals have the mission to provide public health services for the whole population regardless of income, social or financial status, and to reduce social inequalities, gender inequality and regional inequalities. SFIL has a lending relationship with 1,031 out of close to 1,400 public hospitals in France and public hospitals accounted for 13% of SFIL’s €3.7bn of new loans to the public sector in 2018.

As well as undergoing a financial analysis, the “healthcare added value” of public hospital loans transferred to SFIL is assessed according to a methodology it has developed.

“This methodology allows to calculate a Healthcare Added Value of each public hospital in the following medical specialties: medicine, surgery, obstetrics (MCO), psychiatrics, follow-up and rehabilitation care, and elderly care,” says SFIL in its framework.

“The objective is to define for each of these medical specialties the social importance of the public hospital in its geographical area.” 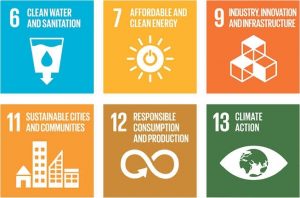 While the social bond contributes towards Sustainable Development Goal 3, ensuring healthy lives and promoting wellbeing for all at all ages, SFIL cites six SDGs as targets of its green bonds (see icons).

For the year 2020, SFIL group plans to issue between €5bn and €7bn split between covered bonds and issuance in the SSA market. As in 2019, ESG issuance will play an important role, with at least one benchmark transaction planned under green or social format.

“Green and social bond issuance will be very much complementary for us,” says Mills. “We plan to come to the market with at least one green or social benchmark per year.

“We expect our volume of green lending to increase significantly over the coming years as local authorities become more familiar with the product.”

DKB sold a four times subscribed €500m five year “blue” social Pfandbrief focused on water and waste water services on Wednesday, with the Eurosystem and SRI investors among those helping the German issuer achieve an “outstanding” deal, according to its head of funding and IR.

The broader sustainability strategies of green and social bond issuers and the impact of their issuance across a range of metrics are increasingly being focused on. Meanwhile, new varieties of sustainable bonds could yield benefits, but complicate the picture. Sustainabonds gathered leading public sector issuers and ESG-focused investors for a roundtable, hosted by SFIL, to discuss key developments.