NordLB Luxembourg Covered Bond Bank is set to launch the first renewable energy covered bond in the coming fortnight, a €300m five year, and the issuer told Sustainabonds it is confident the uniquely green legislative product will prove a timely addition to the market.

After announcing its planned debut on 17 October, the issuer last week completed a roadshow during which it saw around 40 investors, and it expects to enter the market in the next week or two, according to Thomas Keith, managing director, financial markets and loans, at NordLB Luxembourg Covered Bond Bank (NordLB CBB).

The issue will be the first under Luxembourg legislation that created lettres de gage énergies renouvelables last year.

“NordLB Group is one of the big pioneers in financing renewable energy, so it was natural for us to look for new funding opportunities,” Keith told Sustainabonds. “That was the idea when we started to promote the initiative of the Luxembourg financial centre creating a green covered bond product.

“It was also our aim to open up a market for new green investors and support sustainable development.”

Whereas green covered bonds have thus far been backed by the same cover pools as issuer’s conventional covered bonds, NordLB CBB’s will be issued against a cover pool comprising only green assets.

“That’s the main distinction from other green covered bonds and a very important factor,” says Hagen Schmidt, senior funding manager at NordLB CBB. “During the roadshow, investors highlighted that it is the first time they have seen a pure green pool and they highly appreciated this.”

“However,” says Schmidt (pictured below, right, with Keith), “while it may be a new asset class within the covered bond universe, the assets themselves are not new to investors or the capital markets, and the loan to value (LTV) approach we are using is well known from mortgage covered bonds. 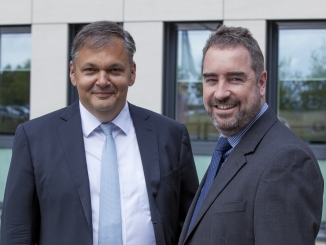 “So although this is a new covered bond asset class and investors have to look at the specific behaviour of renewable energy assets, it’s not rocket science.”

Features of the legislation – such as a risk-oriented LTV concept, a minimum overcollateralisation requirement, and external monitoring of the cover assets – mean the new product is firmly anchored in the covered bond universe, according to Schmidt.

“The LTV concept is a little bit more sophisticated,” he added, “because you have not only one LTV level, but a modular system depending on the risk factors – such as merchant risk and construction risk – and the lower the risk, the higher the LTV. These requirements are all laid down in the Luxembourg financial sector law and by the regulator (CSSF) in a general valuation principles circular.”

Also enshrined in Luxembourg’s legal framework are the four core components of the Green Bond Principles (GBP) that are typically only voluntarily undertakings: use of proceeds; process for project evaluation and selection; management of proceeds; and reporting.

“If you go through those four major points of the GBP – except for impact reporting, which is still evolving in the market – they are all anchored in the financial sector law or circulars attached to it when it comes to renewable energy, and that’s a big advantage,” says Schmidt. “For example, renewable energy is defined in the covered bond law, and you can only include loans and projects that qualify under this.

“Voluntary commitments are better than nothing, but in the end, if it’s law-based, that’s the best you can get.” 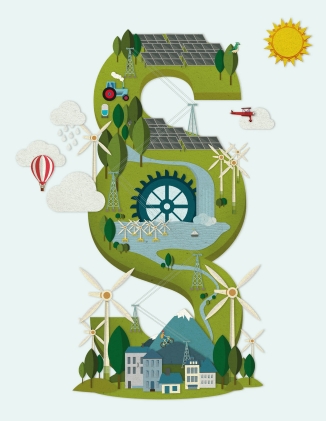 Investor feedback on the roadshow was consistently positive, according to Keith. The only reason investors might hesitate, he adds, is the limited size of the deal, €300m, which has been targeted as the minimum amount necessary to be eligible for green bond indices such as the Barclays MSCI.

“Some investors would like to see a €500m issue, so the sub-benchmark was a kind of minus point,” he says. “They would have preferred a benchmark from us right away.

Although sustainable finance is high on the European Commission’s agenda, mooted dedicated provisions for green issuance did not make it into the EU covered bond legislative package that was finalised earlier this year.

“To be honest, we were a bit disappointed that the sustainable idea was not taken into account,” says Schmidt. “We had hoped that the energy transition would be reflected in the directive, which offered a unique opportunity.”

“We nevertheless hope that some kind of preferential treatment for those sustainable activities that positively impact our day to day life will be considered in the ongoing discussions at the European level.”

Looking ahead, Keith hopes lettres de gage énergies renouvelables could be scaled up.

“A huge expansion of renewable energy remains to be done in the coming years to meet the climate targets of the Paris Agreement,” he says, “so this is a huge field in which we could develop our issuance and which others could follow once we have set a successful example.

“We are the only issuer active in the lettres de gage market,” he added, “and we would love to have others join us. I am sure this new product will meet the spirit of the time and a major need of the market.”

NordLB Luxembourg Covered Bond Bank is preparing to issue what it expects to be the first covered bond backed by renewable energy assets and launched under a dedicated law, with its debut likely in early 2019, according to officials at the issuer.