BBVA issued the largest green bond from a Eurozone bank today (Thursday), a EUR1bn seven year senior non-preferred deal that inaugurated a new SDG-aligned framework and attracted more than EUR2.5bn of demand despite coming relatively tight in a recovering market.

It is the first bond issued under a Sustainable Development Goals (SDGs) Bond Framework announced by Banco Bilbao Vizcaya Argentaria (BBVA) last week, whereby the uses of proceeds are mapped to various SDGs.

“The BBVA SDGs Framework aims to finance projects and entities that support the Global Goals and the 2030 Agenda,” said the bank.

Under the overall SDGs Bond Framework, BBVA can issue green and social bonds, aligned with the ICMA-led Green and Social Bond Principles, respectively, or sustainability bonds that are a combination of the two and thereby come under the Social Bond Guidelines.

“We are committed to sustainable finance, and this issue is yet another example,” said BBVA CEO Carlos Torres Vila (pictured). 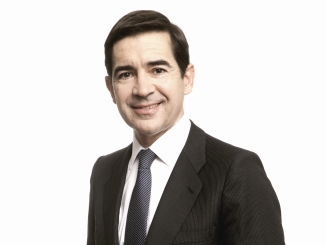 The Spanish bank announced this (Thursday) morning that it had mandated BBVA as green structuring adviser, and BBVA, Commerzbank, Crédit Agricole, HSBC, SG and UniCredit as joint bookrunners for the transaction.

The seven year issue was then launched with initial price thoughts of the mid-swaps plus 95bp area. After just over one hour and 20 minutes, the leads announced that books had surpassed EUR1bn.

Guidance was subsequently set at the 80bp-85bp area, will price within range, with books in excess of EUR2.3bn. The spread was then fixed at 80bp and the size at EUR1bn with books over EUR2.8bn, pre-reconciliation. The final book stood at over EUR2.5bn good at re-offer, with more than 200 orders.

Syndicate bankers described the result as being particularly impressive given market conditions, noting that heavy supply of TLAC/MREL-eligible debt in the first quarter had led to investor selectiveness, rising premiums and spread widening.

“I think this deal went incredibly well,” said a syndicate banker at one of the leads, “especially against a softer backdrop and given this is a peripheral issuer – albeit a national champion – opening the market after a slow period, with the senior unsecured asset class still only half recovered from a hangover on the back of the surge of supply we saw pre-Easter.

“In the end it was really well received by the wider investor community.”

Just over half, 51%, of the bond was allocated to SRI investors. Fund managers took 77%, insurance companies and pension fund 18%, banks 9%, and others the balance. French accounts were allocated 40%, Germany and Austria 17%, the Nordics 11%, the Benelux 8%, and the UK and Ireland 8%.

The lead syndicate banker said interest in the trade was high given that it is the first green senior non-preferred (SNP) deal from Spain.

“I think this is going to be the first in a long series of green SNP issuances to come,” he added. “We definitely saw very strong interest from dedicated SRI investors.”

The bank said that the choice of a senior non-preferred issue to inaugurate its programme surprised investors more used to green bonds coming in senior preferred format or as mortgage-backed securities (MBS).

The lead syndicate banker added that demand was also supported by the relative scarcity of BBVA issuance and its status as a national champion. The issuer had previously announced plans to print EUR2.5bn-EUR3.5bn of senior non-preferred debt this year and had printed EUR1.5bn of this prior to today’s trade.

Syndicate bankers at the leads said the deal was priced with no new issue premium, seeing Santander 2024s – a conventional senior non-preferred bond – trading at 77bp-78bp, bid, this morning, and noting that BBVA is lower rated than Santander.

“We haven’t seen many 15bp pricing moves in recent months,” added a syndicate banker away from the leads.

The establishment of BBVA’s SDGs bond framework is part of a climate change and sustainable development strategy announced by BBVA in February, under which the bank pledged to mobilize EUR100bn in green finance, sustainable infrastructures, social entrepreneurship and financial inclusion through to 2025.

“At BBVA, we want to play a key role in mobilizing resources to halt climate change and promote sustainable development,” said BBVA group executive chairman Francisco González at the time. “It is an ambitious, long-term goal in line with our purpose of ‘bringing the age of opportunity to everyone.’”

BBVA’s programme has received an independent verification assessment from DNV-GL. The bank will publish annual reporting on each bond issuance within 12 months of the launch date.

Bank of China is printing the first deal out of China to be dubbed a covered bond today (Thursday), a three year green issue backed by domestic climate bonds, although bankers noted the deal is being priced in line with the issuer’s senior debt.

Caffil looks set to become the first French issuer of a green or social covered bond, as it plans to this year issue a social bond backed by the public sector assets it refinances with an initial focus on healthcare, and to later enter the green bond market, officials at the issuer told Sustainabonds.