Caffil is roadshowing a social bond that is set to be the first social or green covered bond from France, with the proceeds refinancing loans to public hospitals, and the group plans to follow up the debut with green covered bonds later this year and potentially social issuance from parent SFIL.

“Social bonds and – at a later stage – green bonds will play an important part in our funding strategy,” Sami Gotrane, head of treasury and financial markets at SFIL (pictured), told Sustainabonds. “When we are financing a local public sector loan we are financing investments in schools, nurseries, hospitals and local public transport. 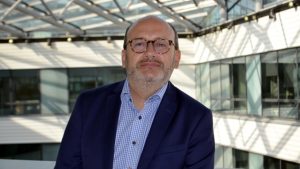 “Public hospitals represent a significant part of our local public sector financing activity,” he added, “and we plan to be a regular issuer in the social bond market.”

The proceeds of Caffil’s issuance are to refinance the group’s health loan portfolio, which consists of all public hospital loans financed by the group since 2013, when SFIL was created.

French public hospitals have the mission to provide public health services for the whole population regardless of income, social or financial status, SFIL highlights in its social framework, and to reduce social inequalities, gender inequality and regional inequalities

SFIL has a lending relationship with 1,031 out of close to 1,400 public hospitals in France and public hospitals accounted for 13% of SFIL’s EUR3.7bn of new loans to the public sector in 2018. Two-thirds of these had a maturity longer than 15 years, while the size of loans ranged from just EUR34,000 to some EUR50m.

As well as undergoing a financial analysis, the “healthcare added value” of public hospital loans transferred to SFIL is assessed according to a methodology it has developed.

“This methodology allows to calculate a Healthcare Added Value of each public hospital in the following medical specialties: medicine, surgery, obstetrics (MCO), psychiatrics, follow-up and rehabilitation care, and elderly care,” says SFIL in its social note framework. “The objective is to define for each of these medical specialties the social importance of the public hospital in its geographical area.”

Annual impact reporting will include as indicators, in line with ICMA recommendations, the number of places and beds, and the number of hospital stays (of one or several days).

“Sustainalytics considers that SFIL is well positioned to issue social bonds and that the SFIL Group Social Bond Framework is credible, robust and aligns with the four pillars of the Social Bonds Principles.”

Among UN Sustainable Development Goals SFIL says its planned issuance will contribute towards is SDG 3, ensuring healthy lives and promoting wellbeing for all at all ages.

After the group’s plans for social and then green bond issuance emerged in the last year, in November the French government, which has a controlling 75% in SFIL, and the state-owned Caisse des Dépôts et Consignations (CDC), which holds 20%, announced discussions aimed at transferring the state’s stake to CDC. The two nevertheless committed that SFIL’s ownership will remain entirely public and its public development bank status be maintained.

The remaining 5% stake in SFIL is held by La Banque Postale, which partners with SFIL in its public sector lending.

Crédit Agricole and SG are structuring advisors on the SFIL group’s social bond framework and are joined as joint bookrunners on the planned intermediate maturity debut by BayernLB, BNP Paribas and ING.

“The first transaction will be a covered bond,” said Gotrane, “but the framework also gives the possibility to issue directly via SFIL for investors in the SSA market.”

Berlin Hyp is set to become the first bank to launch a sustainability-linked bond next week, a 10 year senior preferred issue tied to a sustainability performance target of a 40% reduction in the carbon intensity of buildings financed by its loan portfolio.

Fourth is with foreign buyers as Berlin Hyp commitment rewarded

Berlin Hyp issued a EUR500m 10 year senior green bond yesterday (Tuesday), thereby becoming the bank with the most green benchmarks outstanding, and for the first time it sold the majority of a benchmark issue to non-German accounts, with its green commitment cited as a factor in investors’ support.

Lower capital requirements for green assets could be credit negative for banks, according to Moody’s, because they could lead to “real risks” being underestimated, but the EMF-ECBC’s Luca Bertalot argues that the industry could satisfy an evidence-based European Commission approach.