Deutsche Kreditbank (DKB) on Thursday issued the first benchmark social mortgage Pfandbrief, a €500m 10 year that attracted €2.36bn of orders and which tackles the politically sensitive topic of housing in its hometown of Berlin.

DKB’s “Berlin Social Housing” Pfandbrief is the first benchmark social mortgage-backed covered bond to have been issued from Germany. The only prior German issuance in a similar vein was the first ever covered bond to carry a green or social label, a €300m “ESG Pfandrief” for MünchenerHyp in September 2014 with cooperative housing loans as use of proceeds that was issued before many of today’s market standards were established.

After a mandate announcement on Wednesday followed by investor calls, on Thursday (28 April) morning DKB leads BayernLB, Erste, NatWest, SG and UniCredit opened books with guidance of the mid-swaps plus 8bp area for the €500m no-grow May 2032 Hypothekenpfandbrief, expected rating Aaa. After three-quarters of an hour, they reported books above €1.3bn, excluding €60m of joint lead manager interest, and after an hour and 10 minutes, the spread was set at 3bp on the back of more than €2bn of demand. The final book was €2.36bn, including €60m of JLM interest.

Syndicate bankers said the result was exceptional and, according to DKB head of funding and investor relations Uwe Jurkschat (pictured above), the book is one of the biggest DKB has achieved.

“We were optimistic that we could reach a good result,” he told Sustainabonds, “but I, at least, did not expect it to be so fast and so big.”

DKB was the first German bank to issue in both green and social formats, and has committed to issue all its public benchmarks in one or the other format. It has twice previously issued in social format, but whereas those two benchmarks were backed by public sector lending, last week’s issue is its first backed by mortgage collateral.

The bank’s social bond framework already included social housing among eligible categories, and the use of proceeds of the new issue is lending to Berlin’s municipal housing companies, which run 330,000 state-owned flats in the state. Jurkschat said the issuer focused on Berlin’s social housing sector because of its size and importance.

“DKB is one of the biggest lenders to these municipal housing companies in Germany and this constitutes one of our biggest loan portfolios, so it plays a crucial role in our business,” he said. “And it’s also a very relevant topic, especially here in our hometown of Berlin, where rents have been rising for years and you have big political discussions and initiatives to stop that. 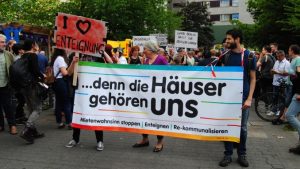 “That’s why we took this topic and thought, how can we address that with a product? So the idea was born to combine that with not just a social housing bond, but one that specifically refinances loans for the Berlin municipal housing companies.”

Thirty-three such loans with a nominal volume of €899m have been added to DKB’s social bond pool, which translates into €632m of DKB’s cover pool. The loans all date from 2015 onwards, since when borrowers have had to comply with a Housing Supply Act that Berlin introduced in 2015 and which Jurkschat said is stricter than elsewhere in Germany and ensures the quality of the framework.

He noted that some of the municipal housing companies have accessed the capital markets directly through their own sustainable issuance in Schuldschein format and were keen to be involved in DKB’s social bond.

“We discussed the project with them before coming to market,” said Jurkschat, “and it was good for them to know that we as a bank view their business as social, and hence refinance it with social bonds. That is a further development of the dialogue with our clients.”

Last week’s benchmark Pfandbrief is DKB’s first since November 2019, although it sold a €500m five year green bond in February 2021. According to Jurkschat, a key factor in DKB’s minimal public issuance has been deposit inflows, which totalled more than €10bn in 2021.

The bank returned to the benchmark covered bond market two days after Société Générale SFH had shown the market to be wide open with a €3bn dual-tranche trade that attracted over €7.25bn of orders and included the first benchmark beyond eight years since Russia’s invasion of Ukraine, a €1.25bn 12 year. Jurkschat said the timing worked out well.

“Normally, I would have expected more traffic after Easter, but the market was not that crowded,” he added. “We chose the 10 year maturity because the tenor of the underlying loans is on average 10 years, and this also proved to be a good choice regarding investor interest.”

The social bond will be the third sustainable format adopted by Berlin Hyp, after it added to its status as the most active bank green bond issuer in April 2021 by issuing the first sustainability-linked bond (SLB) from a bank.

The use of proceeds of the social bond are affordable housing in Germany and the Netherlands for lower income households. The framework also incorporates environmental minimum safeguards, with only the best 70% of national building stock being eligible.

ABN Amro and Crédit Agricole are structuring advisors for the social bond issuance, and are mandated as joint leads alongside Commerzbank, JP Morgan and LBBW, with launch expected tomorrow (Tuesday) after investor calls today.

Protest photo: signs read “I love expropriation” and “because the houses are ours”; Credit: some human/Flickr

As a conduit for Covid-19 economic mitigation measures, KfW is at the heart of Germany’s fight against the impact of the coronavirus. New treasurer Tim Armbruster and head of IR Jürgen Köstner spoke to Sustainabonds’ Neil Day about the practical and market challenges it faces in its latest role, and its overall sustainability ambitions.