Handelsbanken and Raiffeisen Bank International sold inaugural EUR500m green senior bonds this week that benefitted from price and execution certainty, respectively, thanks to their greenness boosting demand amid choppy conditions, according to bankers at and away from the leads.

The two deals were issued in a week when broader markets remained subject to bouts of volatility on the back of US-China trade war concerns. On Monday, Svenska Handelsbanken’s senior preferred deal was the only euro bond issue live in the financial institutions space.

“Risk assets are down across Europe and Asia today on the back of increased volatility upon the comments made out of the US, so it isn’t surprising that there’s only one resilient product – with the green element attached to it – that went live today,” said a syndicate banker on Monday. “Markets are very shifty right now, we’re talking one day up, one day down.”

Although a broader range of deals were brought to market as the week progressed, bankers said the conditions favoured lower beta products, grouping green bonds in this category – alongside secured issuance in the form of covered bonds – thanks to the additional support they receive from dedicated green accounts. Indeed, much of the week’s issuance would have a green flavour – with the French government, German development bank NRW.Bank and Danish agency Kommunekredit also among those issuing green bonds.

“It has been a very green week,” said a syndicate banker.

Handelsbanken leads Bank of America Merrill Lynch, Handelsbanken Capital Markets and HSBC launched the Swedish issuer’s EUR500m no-grow five year deal with initial price thoughts of the 35bp area. Guidance was later set at the 25bp area, plus or minus 2bp will price within range, before the spread was fixed at 23bp. Books closed at over EUR1.4bn.

“We are delighted at the huge response from the market and the interest shown by both Swedish and international investors,” said Elisabet Jamal Bergström, chief sustainability officer at Handelsbanken. “By issuing a green bond, our focus on climate change and other sustainability topics becomes even clearer.”

Syndicate bankers said the deal paid a new issue premium of around 3bp versus the issuer’s conventional senior curve. Bankers away from the leads said that this was at least 2bp less than a new conventional senior issue would have been required to pay.

“It was interesting to see that investors conceded on the new issue premium, so to speak, to buy green,” said a syndicate banker away from the leads. “Overall, across the whole senior preferred space, I would have expected issuers to be looking for more additional pick-up on the back of the market conditions.

“There’s clearly a lot of investors enticed to buy senior preferred, especially with the green label attached to it,” he added. “In addition to that, Sweden is as safe as you get in terms of geography and Handelsbanken is one of the best rated names you can get in the senior preferred market.”

The framework has a second party opinion from Cicero, which gave it a “dark green” shading – the best ranking on its shading scale.

The new issue for Raiffeisen Bank International (RBI) is the first benchmark green bond from an Austrian bank. The Austrian market was opened in September 2017 in sub-benchmark format by Hypo Vorarlberg, which issued a EUR300m five year green senior unsecured bond.

RBI and its leads completed a European roadshow marketing the deal on Wednesday and books were opened for the EUR500m no-grow three year issue yesterday (Thursday) morning with initial price thoughts of the mid-swaps plus 50bp area. Guidance was set at 40bp-45bp, will price in range, with books above EUR1bn, before the spread was fixed at 40bp. The final book stood at over EUR1.3bn.

“The demand for green investment opportunities is growing continuously,” said Martin Grüll, CFO of RBI (pictured). “With our green bond we can meet this demand and at the same time finance sustainable projects in our home market. 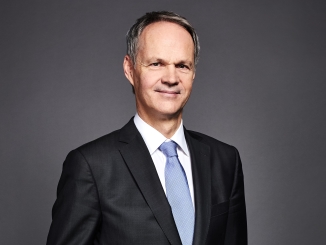 “The high demand and very positive investor feedback show that we are on a very good path with our sustainability initiatives.”

A syndicate banker at one of the leads said the deal “ticked all the boxes” despite being issued in weaker conditions. He said that, in addition to demand from green accounts, the deal’s relatively rare three year maturity contributed to its success.

“A lot of issuers are limiting execution risk in this market by shortening duration or issuing lower beta products, perhaps by adding a green element, and RBI delivered on all these parameters, resulting in a very successful deal,” he said. “There was a substantial number of investors that came into this trade for the green element that would not have participated without it.”

RBI’s deal was deemed to have paid a new issue premium in the high single-digits, although syndicate bankers said it was difficult to estimate fair value given the lack of Austrian senior unsecured paper.

The lead syndicate banker said that due to the deal’s shorter maturity, which ensured a tighter overall print, and a deterioration in broader market conditions through the week the deal was also priced with little if any “greenium” versus conventional senior, but said that the advantage of the green element was instead a more assured execution.

Berlin Hyp became the first bank to sell a sustainability-linked bond (SLB) yesterday (Tuesday), issuing a €500m 10 year senior preferred bond with a coupon step-up should it not hit a carbon reduction target, in a “courageous” move that met with dedicated investor interest and achieved tight pricing.